The truth behind Zahira’s lies

The truth behind Zahira’s lies

Yes, Zahira lied. But can you blame her when the local MLA was threatening to kill her family? With no protection, witnesses have to choose between guarding the truth or their lives.

A 19-year-old girl has created a stir by raising questions about the judicial process in Gujarat. Zaheera Sheikh, the key witness who turned hostile in Vadodara’s Best Bakery murder, re-emerged from hiding after the judge freed all 21 accused due to insufficient evidence. “I lied in court because I was under pressure,” she said at a press conference in Mumbai. “I was intimidated by BJP MLA Madhu Shrivastav and his cousin Congress councillor Chandrakant Shrivastav. He threatened to kill our family if I spoke the truth. I want the case to be tried again outside Gujarat.”

Zaheera lost two family members when their bakery was burned during last year’s communal violence, killing 14 people. The police complaint was based on her statement. She had identified several accused. From her home, located above the bakery, she had seen the mob reduce their lives to ashes. But in court, she denied her police testimonies. She said she saw nothing. She left the court room, escorted by Shrivastav. Many speculated that a deal had been struck. 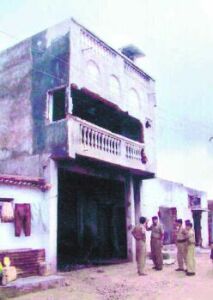 Police guarding the Best Bakery in Vadodara as the NHRC team arrived on a fact-finding mission to the city.
So why has Zaheera emerged after the verdict has been passed? “After my testimony, I went to our village in U.P. When we came back, we heard accusations that we had taken money. That’s why I decided to clear our name. We didn’t get anything. No one helped us. Not even the relief committee. They asked us to pay Rs four lakh for a lawyer,” said Zaheera. But she didn’t say much more. The citizen’s group that brought her to meet the press were in a dilemma. They were worried her legal case could be jeopardised if she spoke beyond a point. Instead, celebrities on the panel fielded questions and spoke on her behalf. It didn’t matter that they had never met her until then.

A day before the press conference, the Indian Express interviewed her mother Sehrunissa, who was also a witness in the case. Explaining how Shrivastav intimidated her family, she said, “Several times he sent threats through others. He called us to threaten us as well. He warned that if we told the truth in court, we would be killed and that Zaheera would not be allowed to reach court. In fear, we retracted our statements.” (Abhishek Kapoor and Ayesha Khan, The Indian Express, 6th July 2003)

Another witness, Lal Mohammed, who lived nearby and whose house was also burned, threatened the Sheikhs not to speak up in court, Sehrunissa added. Lal Mohammed also turned hostile in court. He did a complete U-turn, testifying that one of the accused actually rescued his family. When a National Human Rights Commission (NHRC) team visited Vadodara on July 8th, he told them that all 21 accused had saved him and several other Muslims. He told them that Zaheera is “now being used by vested interests”.

After Zaheera’s disclosure, many like Lal Mohammed, the Shrivastavs and the public prosecutor have been publicly embarrassed. Madhu Shrivastav threatened to sue Zaheera. He told Frontline, “She has made false accusations. I have never seen her except in the court where she was wearing a burkha. After giving her testimony, she went home with her family.” However, Zaheera was seen leaving the court room escorted by Shrivastav. He was quoted as saying, “I accompanied her here only because she received threats. After that, I don’t know anything about her.” (Abhishek Kapoor, Indian Express, 28th June 2003). At the press conference, Zaheera admitted, “We were all scared. My brother told me to get into Shrivastav’s car. So I went.”

Zaheera is now adamant on getting justice. Her lawyer, Mihir Desai, said, “The public prosecutor met her for the first time in the court room itself. There were no efforts to ensure the safety of such a vulnerable witness. The public prosecutor did not even bother to cross examine her or ask for an adjournment once Zaheera and other witnesses turned hostile. We are asking for a re-trial in a non-hostile atmosphere. We would also like a special public prosecutor appointed.” When contacted by Frontline, Raghuvir Pandya, the public prosecutor refused to comment.

In most district courts in Gujarat, the VHP has strong support amongst lawyers. In Vadodara, lawyers filed a contempt of court case against the NHRC for describing the Best Bakery judgment as ‘a miscarriage of justice’. In the Sardarpura village case in Mehsana, where 33 were burned alive, the witnesses have asked for a special public prosecutor to be appointed. The current district public prosecutor is Dilip Trivedi, general secretary of the VHP. In Ahmedabad, Chetan Shah has been appointed district government pleader. He was acquitted in a 1987 communal riots case in which nine people were burned alive. In the 2002 carnage, it was mainly the VHP that executed the massacres.

The Best Bakery case is one of the first to be tried in the fast track courts set up to try riot cases. Ironically, another fast track court in Gandhinagar also acquitted all 22 accused of looting a farmhouse in Pimplaj on the same day as the Best Bakery judgment was passed. In this case too, the victim, Mohammad Noor Fakir Mohammad, turned hostile.

The entire system seems to be working against the riot-affected. Initially, the police refused to take down statements. When they did register complaints, they did not include all the details mentioned by the witnesses. They did not record names of the accused mentioned by witnesses. Moreover, the police filed group FIRs instead of separate cases for each complaint. Already, the police have closed around half of the 4252 cases citing lack of evidence. These cases will not be tried in court. 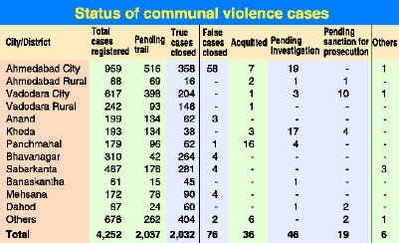 Shoddy police investigations have ensured that even the few cases that do make it to court end in acquittals. Witnesses to Ahmedabad’s Chamanpura massacre are asking for a re-investigation into the case. They allege that the police did not take down their testimonies properly, deliberately omitting details and the names of the accused. Around 40 people, including ex-Congress MP Ehsan Jaffrey, were burned alive in the massacre.

The police have closed several cases without bothering to investigate them. In Panchmahal district, two tempos carrying refugees from Kadiad village in Sabarkantha were burned en route killing 73 persons. The case was closed six months back. “Not a single person was named as an accused although witnesses had given the police the names of the culprits. Around 50 families from Kadiad are still living in a relief camp in Modasa,” says Suhel Tirmizi, human rights lawyer.

In Randhikpur village, a mob mass raped and killed 18 of a single family. The culprits are still roaming free. The sole survivor and witness of the massacre is a 19-year-old girl. She was raped (when she was pregnant) and her two-year-old daughter was killed. Although she testified, naming the accused, the police closed the case citing insufficient evidence. They stated that the mental condition of the witness was “unstable”.

Witnesses who dared to name powerful leaders were put behind bars. Twelve residents of Naroda Gaam in Ahmedabad testified to the role of BJP MLA Dr. Maya Kodnani and VHP president Dr. Jaideep Patel in one of the worst massacres in Gujarat. Six months later in September, the police jailed these 12 witnesses as accused in a murder case. The murder occurred in March 2002. When the case was filed, the names of the deceased or the accused were not known. Suddenly, six months later, the 12 witnesses were jailed for this murder. Two still haven’t been able to get bail.

The police haven’t arrested several accused. They are apparently ‘absconding’. However, they roam around freely in the villages, harassing the Muslim victims. “If the government really wants to, it can do a lot. It can seal the property of all the accused who are ‘absconding’, like they did in the Godhra case,” says Mihir Desai. “Why should witnesses turn hostile? Why can’t they ensure their safety? The law allows judges to threaten hostile witnesses with a jail sentence. They can make use of this as well. But what justice can one expect when the prosecutors, many of whom are VHP members, are siding with the accused?”

In Panchmahal district, which saw some of the worst violence, all 26 cases tried until February had resulted in acquittals, Narsimha Komar, police superintendent of Panchmahal told Frontline in February 2003. In the Pandharvada village massacre where 21 were murdered, all 15 accused were acquitted. In the Limbdia chowkdi case, 12 people were arrested for setting on fire and killing 15 while they were escaping from an attack on their village. The court acquitted all of them.

The trials that are currently underway in rural Gujarat’s kangaroo courts are a farce. Public prosecutors couldn’t care less about the victims. “In the Kalol court, a public prosecutor fell asleep during the second half of a trial. People jeer while witnesses relate incidents of rape or murder. The accused act rowdy and shout that they will be freed,” says Navaz Kotval from the Commonwealth Human Rights Initiative. In the trial of the Eral village massacre in Panchmahal (7 killed), the judge insisted all 32 witnesses appear at the same time or else the trial would not continue. Getting to the court is intimidating enough for victims. Making them travel 60 km to the court more than 20 times is sheer torture.

In Gujarat, most victims remain in hiding, still threatened by the ‘absconders’. It’s very rarely that a Zaheera can dare to speak out.

PROGRESS OF SOME MAJOR CASES IN GUJARAT COMMUNAL VIOLENCE

2. Naroda Gaam, Ahmedabad, 12 killed.
Trial yet to begin. Witnesses who named politicians jailed in connection with a murder case.

3. Gulbar Society, Chamanpura, Ahmedabad, 67 killed.
Witnesses asking for their statements to be recorded properly and for a thorough investigation.

5. Randhikpur village, Dahod, 18 killed.
Case closed as true but undetected (due to lack of evidence). Main witness named the accused. But police have not arrested them. Instead police have declared witness ‘unstable’.

8. Anjanwa village, Panchmahal, 11 killed.
20 accused absconding, 5 accused not named in chargesheet. Witnesses have asked for the arrest of the accused or for their property to be attached as was done against absconding in Godhra case.

9. Ambika Society, Kalol, Panchmahal, 13 killed.
FIR clubbed with three other cases that occurred in three separate places: Kalol, Boru and Vejalpur. Trial has not yet begun.

10. Eral village, Panchmahal, 9 killed.
Witness is a woman whose daughter was raped and killed. Has asked for ‘absconding’ to be arrested and for names to be included in the chargesheet. Judge will not proceed until all 32 witnesses are present at same time in court.