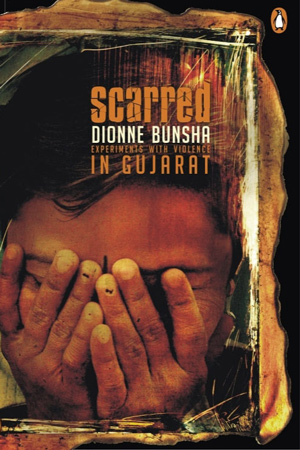 Scarred: Experiments with Violence in Gujarat asserts the existence of a much larger politics of violence, and tells the story of a disaster in Hindutva’s laboratory which etched deep faults in Gujarat’s social landscape.

While capturing the predicament of the Sabarmati Express survivors, Scarred is an intense, moving portrait of refugees whose lives have been changed forever by the violence that followed. It tells the story of people fighting for justice amidst fear and turmoil, unable to return home. It is also an insightful look into the minds of the perpetrators of this violence, and the world they seek to construct—a world where the ghettoization and socio-economic boycott of Muslims have become the norm.

What exactly happened in Gujarat in February 2002? Why did the country’s political leaders fiddle while Gandhi’s Gujarat burned? In this honest and thought-provoking book, Dionne Bunsha tries to answer these and many of the questions that we are still left with.

“In Scarred, Dionne Bunsha takes us back to Gujarat and reveals the awful routine business of everyday fascism. This is an excellent piece of work, and everyone ought to read it.”

“It is unlikely that you can get anything better than Dionne Bunsha’s account which is meticulous, moving, sensitive, thought-provoking.”
– THE HINDU, C.T. Kurien

“Beautiful…Scarred is not dark, it is one assured step forward inside the darkness, to explore light…. It’s straight-forward, honest to the core, a reporter’s authentic notebook on the wounds that have refused to heal.”
– TEHELKA, Amit Sengupta

“It’s a remarkable book. I really urge everyone to read it and I greatly applaud Dionne’s effort for staying with the story and producing much more than just a story but an extraordinary document.”
– JUST BOOKS, NDTV, Sunil Sethi