In Gujarat, fear is not a four-letter word. In fact, it’s the centrepiece of the BJP’s election campaign, effectively obscuring the real issues.

The theatre of the absurd continues in Gujarat. The chief minister admits himself into hospital because he doesn’t want his dissenter to contest elections. A Congress(I) MLA’s goons smash windows and attack their own party office because their leader wasn’t given a ticket. When he finally does get his ticket, the woman candidate he trounced attempts suicide. And, the BJP wants to railroad all other issues and fight the election based on the burning of a train. 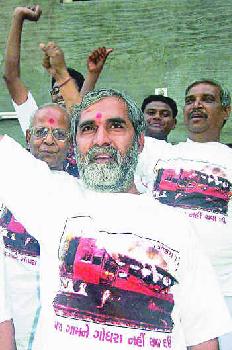 The BJP propaganda machine has put out a promotional video that shows no visuals of the burning train or Akshardham (to prevent the wrath of the Election Commission), but with lettering that reads, “You are travelling. You can be attacked.” Then there is the sound of bells ringing and bullets. “You are praying. You could be attacked.” It goes on to show images of Modi at the sites of both the killings with lines that read, “Many killers. Only one saviour.” To top it all, Modi got the daughter of one of the Sabarmati Express victims to sign his nomination papers. The BJP plans to use relatives of Godhra victims during its campaign trail.

Modi’s manifesto lists several measures to counter terrorism. These include arms training for residents of border areas, formation of shakti gram in co-ordination with the Defence ministry and the creation of a second line of defence with volunteer forces such as gram rakshak dals, home guards and NCC. While launching the election campaign in Bhuj, deputy prime minister L.K. Advani even spoke of starting another war with Pakistan. He dared Pakistan to fight a fourth direct war with India instead of engaging in a proxy war targeting temples and innocent civilians. It seems like the BJP’s one point agenda is numb voter memory by using the ‘terrorist scare’.

The Congress(I) campaign is trying to highlight basic problems – unemployment, water shortages, the power crisis and the recent co-operative bank scam. “The BJP may use Godhra, but people will look to their belly. Gujarat’s entire economy was shattered after the communal riots, with losses of Rs 25,000 crore. People have lost their savings in co-operative bank scam. After that, who will vote for the BJP?” asks Congress(I) leader Hasmukh Patel. But the Congress(I)’s voice is being drowned out by strong BJP propaganda. The flamboyant Congress(I) president Shankarsinh Vaghela, a BJP rebel, has maintained a mysterious silence recently. Given his ability to match the BJP’s aggressiveness, Vaghela has not confronted the BJP’s ridiculous communal rhetoric. This may damage the Congress(I)’s chances of victory, especially in cities and riot-hit rural areas. 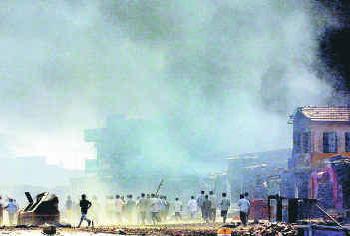 In Ahmedabad, during the post-Godhra riots.Photo: Manish Swarup/AP
During the recent state-supported communal carnage, Congress(I) strongholds in north and central Gujarat were targeted. The worst violence occurred in Panchmahal, Dahod, Chotaudaipur, Sabarkantha and Anand, the traditional rural support bases of the Congress(I). The BJP has been trying to erode these Congress(I) bastions, most of which are in the Adivasi areas of central Gujarat. It started the Hindutva campaign in tribal areas with the Ram Janmabhoomi movement in 1992. But the Adivasis remained loyal to the Congress(I). During the recent violence, the Sangh Parivar mobilized Adivasi mobs to attack Muslims.

Post-Godhra, the BJP has managed to erode Congress(I) support in some places. “The Congress(I) has always won here, but now the BJP has gained. They helped release the innocent who were arrested (for rioting). Muslims started the trouble by burning the train. Why should we let others harm our religion? Besides, the Congress(I) MLA here hasn’t done anything to solve our problems,” says Gopal Dhabi, from Bhilpur village in the tribal belt of Chotaudaipur. However, others believe that tribals will still remain loyal to the Congress(I). “Most of our business is from Adivasis. They are still friendly with us. Its as if nothing happened in the past. They were only used as a paid mob by local Hindu traders. They will still vote for the Congress(I),” says Shabbir Khatri, a Muslim shop owner in Tejgadh, rural Vadodara district. “Adivasis participated in the riots because they were told that within those 72 hours, they could loot and the police would not stop them. But that was for temporary benefit. They are still part of the Congress(I) fold,” says Hasmukh Patel.

Within the BJP too, some believe that caste and local politics, not Hindutva, will be decisive factors. “Local problems, politics and caste equations are likely to dominate more than Hindutva or any other issue,” says a BJP insider. With seat distribution complete, the patterns of caste conciliation have emerged. Both parties have appeased the two most dominant communities in Gujarat – the Patels and the Darbars (OBCs). Within the BJP, Modi has stifled any dissent over seat distribution. Former chief minister Keshubhai Patel, the main Patel leader from Saurashtra, demanded that his nominees be given tickets. But apparently, only 30 of his 60-odd requests were granted. Modi refused to file his nomination papers if the party gave a ticket to former home minister Haren Pandya, who resigned from Modi’s cabinet due to sharp differences. In the last election, Pandya won by a large margin from the Ellisbridge constituency of Ahmedabad.

Certain personal favourites on both side of the fence have also been rewarded. The BJP nominated Bajrang Dal president Haresh Bhatt as its candidate from Godhra, despite strong opposition from local leader and former BJP MP Gopalsinh Solanki. Education minister Anandiben Patel, known to be close to Modi, was allowed to change her seat from Mandal in Ahmedabad to Patan in north Gujarat. Although Vaghela is not contesting the election, his son Mahendrasinh was nominated from Sami in Patan, north Gujarat. Shankarsinh’s personal assistant Chattrasinh Chauhan has been given a ticket from Shehra in Panchmahal. Congress(I) Adivasi leader Amarsinh Chaudhry’s son, Tushar, was also given a ticket from Vyara in Mandvi, south Gujarat. The spirit of nepotism is well and truly alive.

A slightly nervous Modi also decided to change his constituency from Rajkot II to Maninagar in Ahmedabad. He could not have chosen a safer seat. Not only is Maninagar a very loyal BJP constituency, it also houses one of the oldest RSS shakhas in Gujarat. Small Muslim pockets in Maninagar, like Millat nagar, were attacked during the communal violence. Modi is viewed as a Hindutva hero in riot-hit cities like Ahmedabad, which has a long history of communal tension. Also helping Modi along will be around 18,000 people from his hometown Vadnagar, who have migrated to Ahmedabad and live in Maninagar. The Congress (I) has nominated lawyer and BJP rebel Yatin Oza to battle Modi. A wily politician, Oza is likely to make things as difficult as possible for Modi. But he has a tough challenge ahead of him.

The other constituency in the spotlight is Godhra. Apart from obvious reasons, this time the fight in Godhra, a traditional Congress bastion, will be interesting. Both candidates are facing severe opposition from within their respective parties. The BJP has nominated Bajrang Dal president Haresh Bhatt, an outsider. Local BJP leader Gopalsinh Solanki protested vehemently. By nominating Bhatt, the BJP has also alienated the OBC vote, since Solanki is from an OBC community. Many traditional BJP supporters may not vote for an outsider. The Congress has nominated sitting MLA Rajendrasinh Patel. But many Muslims are disappointed with the choice. They allege that the participated in the communal violence. Muslims comprise half of Godhra town’s population. Apart from the town, several villages also fall within this constituency. Winning this seat will be a prestige issue for both parties.

The different regions in Gujarat are also likely to show throw up distinctive patterns. In the riot-torn north and central Gujarat, the fight is likely to be fierce. But in Saurashtra and Kutch, which were not affected by the communal violence, the Congress(I) is confident of gaining several seats due to the anti-incumbency factor. A stronghold of Keshubhai Patel, the BJP won 52 of 58 seats here in the last election. This time, since Keshubhai is miffed and since water and power shortages are a major concern in this agricultural belt, the Congress(I) is expecting to capture many BJP seats. The BJP may lose ground in Kutch too due to public anger over the government’s bungling of earthquake rehabilitation as well as the water crisis. In south Gujarat, the Congress(I) may retain its hold over the tribal belt in the Dangs. But in other areas, it may be an even fight. In all cities, the BJP is likely to retain its hold, especially after the riots in Ahmedabad and Vadodara.

The BJP’s gory, cynical strategy seems to be working. By creating a fear psychosis amongst people, it is projecting Modi as the Hindutva hero. But some Congress(I) supporters are still waiting for them to wake up. As Gokalbhai Rathwa , an Adivasi from Dhalnagar resettlement village in rural Vadodara puts it, “Many people, including Adivasis, believe that the BJP is the only party that will protect Hindus. They fear that if the Congress(I) comes, there would be a Muslim backlash. But why isn’t the Congress(I) emphasising that in their 50-year rule, no village in Gujarat had no communal tensions even though the Muslims were with them? The Congress(I) too should reach out to people. Election day is near.”

The BJP intends to go full steam ahead with the Godhra issue. The Congress(I) will have to work fast to prevent the election debate from being railroaded. Before theatrics completely takes over politics.