The Mystery of the Vanishing Evidence

The Mystery of the Vanishing Evidence

The Gujarat police have left no stone unturned to ensure that the rapists and their instigators escape justice. More than half the 4,252 riot cases have been summarily closed.

She still has to hide behind closed doors. There is no place where she feels safe. The people who attacked her are free. But Sharifa (name changed) is on the run.

Village leaders, who allegedly raped her and killed 14 of her family members, remain unpunished. Sharifa testified against them in her statement to the police. Now, she is afraid they will harm her before the trial.

“There is a rumour that they have announced a Rs.5-lakh reward to kill me. They are all roaming around freely. They can track us down anywhere,” says Sharifa. “So, we avoid going out much. After we left the Godhra relief camp in July, our family has shifted from one rented home to another more than five times.”

While they were escaping the attack on Muslims in her village of Randhikpur in Dahod district, a group of village leaders allegedly ambushed Sharifa and her family. They murdered 14 people, including three children. “I managed to survive even though I was six months pregnant at that time. They murdered my three-year-old daughter,” she says. There was no harm to Sharifa’s unborn child. Sharifa gave birth to a girl three months later, while she was still in the Godhra relief camp.

Her husband was in the fields during the attack. He fled to another village and was missing for several months. He traced his family many months later. Fearing that Sharifa’s assailants will get to him, he avoids going out to look for work. Their family still has to live on the generosity of local relief committees.

While some refugees from Randhikpur go to the village for work, they cannot return to their homes. They live in the nearby Devgad Baria village. “It is too dangerous for us to go back there. I shall stay here so that I can testify against them,” says Sharifa. “I named more than 10 people in my police statement. But not one of them has been arrested. They are all big people in the village – doctors, lawyers and panchayat members. Some belong to the Vishwa Hindu Parishad.”

Ironically, the police say there is not enough proof against the accused. “We haven’t arrested any of the accused because there is no evidence against them. Sharifa gave contradicting statements at different points of time,” says D.R. Patel, Superintendent of Police, Dahod district. Sharifa denies making differing reports. Even if she did, the police showed no consideration for the trauma she underwent initially. While coming to terms with the shock of the assault, she also had to contend with a battery of questions from social workers, police personnel and the media.

“Who are the police to decide whether there is enough proof? If someone is named as an accused, they should be arrested. Then, let the courts decide,” says Mihir Desai, a human rights lawyer. “The manner in which the police have handled the riots cases shows a total breakdown of law and order. Either the police are totally biased, or they are totally incompetent,” says Desai. 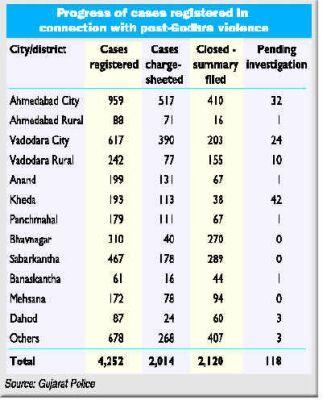 But the statistics only begin to tell the story. Even cases with sufficient proof are being closed. Names have disappeared from charge-sheets. Many witnesses complain that the police have not recorded their testimonies. While recording statements of witnesses, the police have left out names or vital facts.

Witnesses who testified against powerful politicians have been put in jail, while the real criminals roam about free. Twelve residents of Naroda Gaam in Ahmedabad testified to the role of Bharatiya Janata Party legislator Dr. Maya Kodnani and VHP president Dr. Jaideep Patel in the worst massacre in Gujarat. Six months later, in September, the police jailed these 12 witnesses as accused in a case of murder, which occurred in March 2002. When the case was filed, the names of the deceased or the accused were not known. Suddenly, six months later, the 12 witnesses were jailed for this murder. They still have not been able to get bail.

Women injured in police firing have also been jailed for rioting. Sairabanu (name changed) from Bangali Vas in Chandola, Ahmedabad, was injured in police firing. “I peered out of our house to see what was happening, when a bullet hit my thigh. My neighbour, who was hit in the neck, died of the injury,” says the widow. After spending a month in hospital, she and her five children stayed at the Shah Alam camp for a few months. Soon after they returned to build a new home, Sairabanu was arrested for rioting and intent to kill. “They put me in Sabarmati jail for a week. They said that I had participated in the rioting. How could I? I have five children to look after,” she says.

Sairabanu, a daily wage earner, had no money to pay for her Rs.3,000 interim bail. Luckily, her neighbours collected money to bail her out. Later, she borrowed another Rs.2,000 for the final bail amount. “The police filed rioting cases against anyone who was admitted to hospital with injuries caused in police firing. They assumed that they were part of the mob. That is why Sairabanu was arrested,” says her lawyer. There are several others like Sairabanu who have been jailed.

The police seem to be protecting certain accused persons. Twenty-eight people were charge-sheeted for the murder of 14 people in Anjanwa village, Panchmahal district. “Of these accused, the police have shown 22 as absconding, although they are known to be moving around freely. Only six have been arrested,” said a human rights activist. Five people named by witnesses have not been mentioned as accused in the charge-sheet. The Gujarat High Court has directed the investigators to explain why these names have not been included.

Even cases with sufficient proof against the accused are being closed. The police are planning to close a case filed by a witness against a police officer who supported the mob in looting and burning houses in Naroda Patiya, Ahmedabad. The police clubbed together separate first information reports (FIR) for separate crimes into one common FIR. “This saved the accused. They would otherwise be charged and convicted separately for each case. It is not the normal practice. Yet it has been done in every police station in Gujarat, almost as if orders were given from the top. Even the Gujarat government’s security adviser, K.P.S. Gill, commented that cases should not have been registered in this manner,” says Tirmizi, a human rights lawyer.

Only a few cases have reached the court as yet. In Panchmahal district, which saw some of the worst violence, 26 cases have been tried in court. In all cases, the accused have been acquitted, says Narsimha Komar, Superintendent of Police, Panchmahal district. This includes the Pandharvada village massacre in which 21 were murdered. All the15 people accused were acquitted. In the Limbdia Chowkdi case, 12 people were arrested for setting on fire and killing 15 people while they were escaping from an attack on their village. All the accused were acquitted in court. “It is very difficult to prove riot cases. Witnesses turn hostile. They have to continue to live in their villages. Even people who lodged FIRs have gone back on their initial statements,” says Komar.

The Chamanpura case, in connection with the killing of former Member of Parliament Ehsan Jaffrey and 58 others in their homes, has also come up for hearing. Witnesses say that the police have not recorded their statements properly. They plan to appeal to the court asking that accurate testimonies be considered and a proper investigation conducted. “Under the Code of Criminal Procedure, it is not necessary for witnesses to sign their statements. That is why the police can write anything and get away with it,” says Tirmizi, who is fighting the Chamanpura victims’ case.

There seems to be a vast difference between the ways in which the police are investigating the Godhra case and the riots cases – there is a lot of zeal in the case of the former and apathy in bringing the accused in the latter to book. “If the government really wants to, it can do a lot. It can seal the property of all the accused who are `absconding’, as they did in the Godhra case,” says Mihir Desai. “Why should witnesses turn hostile? Why can’t the police ensure their safety? The law allows judges to threaten hostile witnesses with a jail sentence. They can make use of this as well. But what justice can one expect when the prosecutors, many of whom are VHP members, are siding with the accused?”

No conspiracy case has been filed in the Naroda Patiya or Chamanpura cases, which were planned attacks. There seemed to be deliberate planning, and more people died in these attacks than in the burning of the Sabarmati Express at Godhra. But only the Godhra case has been considered a terrorist act. The manner in which many of the post-Godhra attacks were carried out points to a pre-meditated plan by the Sangh Parivar and its leaders. Yet, the police have never considered investigating the conspiracy behind these attacks.

Until the big fish are caught, people like Sharifa may have to keep hiding. She is still hoping that the day will come when there will be a role reversal – that those who attacked her will be put behind bars, and it will be safe for her to roam the streets.