Students and young people are at the forefront of a protest against hydel projects that are being planned in Sikkim.

The relay fast that has continued in Gangtok since June 2007. The Affected Citizens of Teesta comprises students, professionals and former politicians.

DAWA LEPCHA has a tube stuck up his nose. It goes right down to his stomach. Sometimes, while he is asleep, it moves and chokes him. But the tube is his only sustenance. The juices poured through it are the only nourishment that keeps him alive.
Dawa Lepcha has been on a fast since March 10. Last year he fasted for 63 days. He and his friends are protesting against the dams on the river Teesta in Dzongu in north Sikkim, the home of the Lepchas, Sikkim’s earliest inhabitants. These young men are in hospital, starving to make sure their tribe survives.

“The entire Teesta river is being tunnelled. The main river of Sikkim is disappearing underground. Is this development?” asks Dawa Lepcha. “Sikkim is a very small State, but very rich in biodiversity. If they are allowed to go ahead with the hydel projects, they will ravage, plunder and destroy everything.”

The Sikkim government has discovered that there is money to be made from hydel power. It has proposed around 26 dams across the State. Of these, seven projects are in Dzongu. It is part of the Central government’s master vision of the north-eastern region as “India’s Future Power House”, with around 168 dams planned. The projects are being cleared at any cost. Recently, Union Minister of State for Power Jairam Ramesh said at a press conference in Guwahati: “I want to check this MoU [memorandum of understanding] virus in the north-east.” Laws have been flouted to grant clearances. Environmental protection has taken a backseat. 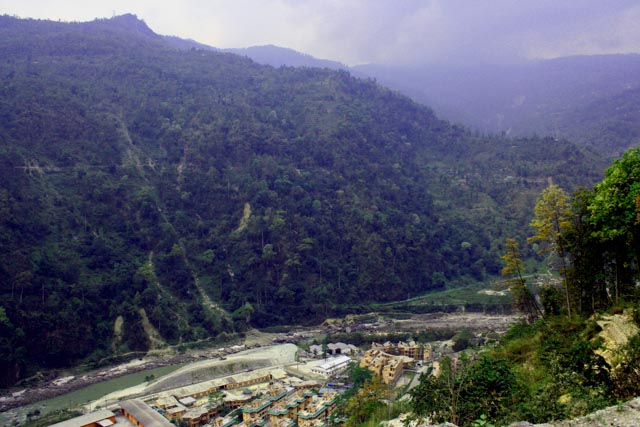 The power house of the Teesta Phase 5 project.

Lepchas are the indigenous people of Sikkim, but they constitute less than 7 per cent of its population. They call themselves rong-kup (people of the ravine). Over the past two centuries, Nepali migrants have outnumbered the Lepchas in their homeland. The Lepchas are now a minority, a dying race. The Lepcha population is now 40,000, of which around 7,000 live in Dzongu, near the magnificent Kanchenjunga, the third highest mountain peak in the world.

Dzongu, the holy land of the Lepchas, was a protected area even when Sikkim was an independent kingdom (Sikkim merged with the Union of India in 1975). Any outsider, even a Lepcha living outside Dzongu, has to apply for a permit to enter it. Only Lepchas from Dzongu can own land here. This was done to protect the sacred land, the dying community and its culture. “By building seven dams in the Lepcha-protected area, and allowing such a large influx of migrant labour, the government is violating its own laws. There are only 7,000 Lepchas in Dzongu. With just one project, we will be outnumbered. Our culture is under threat,” says Dawa Lepcha.

Sitting on the hospital bed across Dawa Lepcha is Onchuk Lepcha. He has left his village Tingvong and come to Gangtok to join the Affected Citizens of Teesta (ACT) hunger strike. “If the land is taken by industrialists, we will be refugees in our own land. It hurts us to see Dzongu being destroyed,” says Onchuk Lepcha. The ACT comprises students, professionals and former politicians who have come together to save the Teesta basin. It has not only Lepchas, but also members from the Bhutia community (Tibetans who migrated here several centuries ago) and environmental groups.

To counter the ACT, politicians who want to see the project go through have started a pro-dam movement. They are organising rallies and have submitted a petition to the government asking for the dam projects to be implemented immediately.
“Sikkim has the potential to generate 8,000 MW of power. We will get 12 per cent of the revenue from these projects. In every development project, there will be some minor destruction, but it’s not much,” says Sonam Gecho Lepcha, a Member of the Legislative Assembly from Dzongu, who is leading the pro-dam lobby. He was earlier part of the anti-dam movement and promised to stop the dams during his election campaign. “No doubt there is some apprehension in my constituency, but the majority of people are in favour of the project. Why else would our party win in the local elections?”

Politicians are using their clout to beat the locals into submission, allege ACT activists. “The MLAs are pressuring people to give their consent to the dams. Even my father was with them earlier. But now I have convinced him about how much damage the dams will do. Most of the politicians and big land owners want the dam so that they can make money,” says Onchuk Lepcha. “People in our villages are innocent. They don’t understand the value of our land. Others can take advantage of them. That’s why the educated Lepcha youth are fighting. We know the dangers,” Onchuk Lepcha explains.

The dams will channel water through tunnels into an underground powerhouse. Sikkim’s Chief Minister Pawan Kumar Chamling claims to be a “green C.M.”. He claims that run-of-the river projects such as the Teesta dams involve smaller submergence of land as compared to storage dams, and hence cause less damage. However, construction of the Teesta Phase 5 project, the only dam which is almost complete, has proved otherwise. “The blasting of rocks to build the tunnels has resulted in the drying up of water sources and landslides in villages near the 23-km-long stretch. A lot of mud and debris has been dumped along the river banks,” says Dawa Lepcha.

Close to the power house of Teesta Phase 5, we met Jung Bahadur Chetri, 70, from Singbel village. Though the State did not acquire his land for the dam, it has made him homeless. “Owing to the blasting, there are so many cracks in my house that it is not in a condition to live in. There are 20 of us in my family. We had to move to another person’s house during the monsoon,” says Chetri. “What’s even worse is that our farms are destroyed because the streams have dried up. We used to sell fruits and vegetables in the market. Now, there’s none for us to eat. The four District Collectors and the MLA have come and gone but no one has listened to us.”

Ever since the dam was constructed, Bhim Prasad Nepal had to give up farming and work as a labourer at a quarry. “This dam has destroyed Sikkim. Water used to spring out of the earth here. Now, it’s all gone – the trees, the farms, the grass. All the villages are hungry,” says Bhim Prasad. “This is the mango season. But there is no fruit. The flowers dry up because there is no water below.”

In Ralap 5 Mile, on the banks of the river, women complained that their homes were sinking. They have to walk several kilometres uphill in search of water after the streams have dried up. “If you ask for even a glass of water now, its difficult for people to get. People say that this dam is for our development. But we haven’t got anything from it, not even a single job. Just misery,” says Leila Chetri, a housewife.

The environmental clearance for Teesta 5 was given in May 1999 on the condition that “no other project in Sikkim will be considered for environmental clearance till the carrying capacity study of the Teesta basin is completed”. However, the Ministry of Environment and Forest (MoEF) violated its own condition, and cleared six projects even before the final carrying capacity study was submitted in August 2007.
Floods and landslides

It is a wonder how the MoEF cleared the dam projects after reading the carrying capacity report. The report recommends that there should be no large-scale development in the geologically sensitive and biodiversity-rich regions of north Sikkim because there is the danger of glacial lake outburst floods, massive landslides and flash floods. The report says that dam-building activities should not be carried out upstream of Chungthang, a town situated at the confluence of the Lachen and the Lachung Chu, tributaries of the Teesta, which is the starting point of the river. It is also a town imbued with Buddhist legend. Guru Padmasambhava, the revered founder of Tantric Buddhism in Tibet, is said to have rested here and left his footprint on a rock. There are seven projects planned north of Chungthang.

Considering that the Teesta basin is in an earthquake-prone area, the report also recommends more surveillance of seismic activity. It recommends small-scale projects south of Chungthang rather than large projects. The report also warns that the views of local communities should not be undermined or neglected. Besides warning about the dangers of dams, the carrying capacity report also focuses on local development measures such as reviving agriculture, organic farming and minor irrigation projects, infrastructure for floriculture, improving schools and health care facilities, protecting biodiversity and endemic species, and restricting commercial taxis.

Although scientists have warned about the dangers of the dams, the Sikkim government insists that they are harmless. “It is the most eco-friendly project. There is no pollution, only a little during the construction,” says an official from the Sikkim Energy and Power Ministry. “We have got all the environmental clearances from the Central government. These are not big dams, just small diversion dams. They are not within the Kanchenjunga National Park.” When asked if dams are dangerous in a seismically sensitive zone, the official said, “The entire Himalaya is a sensitive zone but the Central government has planned hundreds of dams across the mountain ranges, not only in Sikkim. No one can prove that people’s homes were damaged owing to the blasting. It could be for other reasons such as earthquakes or landslides.”

Though the Sikkim government’s newly formed Glacier & Climate Change Commission has initiated scientific studies on its melting glaciers, it has not factored in the effects that receding glaciers would have on the dams. “There’s no way the melting glaciers will affect the dam. Even if glacier water is not there, rainwater will feed the rivers,” says the official. His opinion contradicts international scientific opinion, which has warned of short-term flooding and the eventual drying of rivers owing to melting glaciers.

Local people have consented to the project, the official claimed. “All landholders have given up their land for the Teesta projects without any objection. We have acquired 40 hectares of land. There was no force. They willingly took the money,” he said. “We are willing to address the concerns raised by the ACT by ensuring that workers who work on the project live in colonies outside the Lepcha area so that they are not affected.” 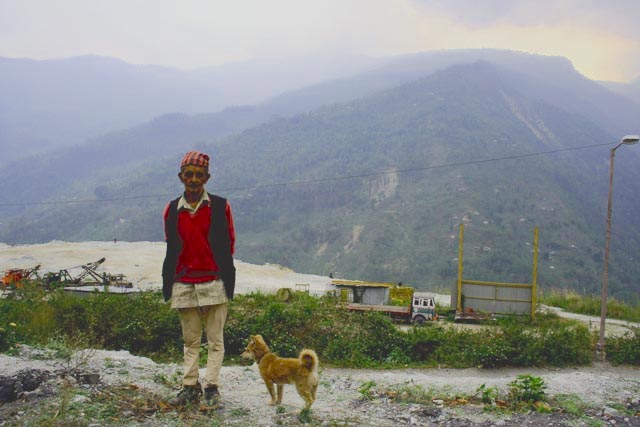 Jung Bahadur Chetri from Singbel village. Chetri’s farm and house were affected by the blasting of rocks to build tunnels. His house has developed cracks and the streams that fed his farm are now dry.

When asked if the damage outweighs the benefits, he said, “We will get 12 per cent of the power, which we can use or sell for revenue. We need electricity. If people don’t want it, why are they sending their children to schools and colleges in the cities?”
But it is the students who are at the forefront of the ACT protest. The tunnels being built under the Teesta could kill the river basin. That is why these youth are risking their lives. They say they would rather choke on the tubes than let the tunnels destroy their sacred land.