Rejecting the police’s conspiracy theory, the Justice Banerjee Committee has called the Godhra tragedy “an accident”. But will it absolve an entire community that has been branded as terrorists?

On 27th February 2002, Ishaq Mohammed Mamdu (30) was at his home in Godhra when he heard about the fire that burned a compartment of the Sabarmati Express when it stopped at Godhra station early that morning. Ishaq is blind and stayed at indoors when curfew orders were passed. Normally, he helped his brother Shabbir in his scrap business. Two months later, the police barged into his house and arrested him under the Prevention of Terrorism Act (POTA) for being part of the conspiracy to burn the train. Ishaq’s bail applications have been rejected. The tension of his confinement killed his mother. He is still in jail.

Not only Ishaq, but the entire Muslim community was blamed for the Godhra tragedy. The Sangh Parivar used it to launch a pogrom against Muslims in Gujarat, during which more than 1,000 people were killed and 150,000 were made homeless.

Almost three years after the Godhra blaze, the Justice Banerjee high level committee, appointed by the Union cabinet to look into the reason for the fire, has said that there is no proof of the ‘terrorist conspiracy’ that Ishaq was supposedly part of. The train caught fire accidentally. It is the first government response that contradicts the findings of the police investigation.

What does this mean for the 104 accused of being terrorists? For now, nothing more than a moral vindication. The Banerjee committee has no legal powers, it has merely submitted the findings of its interim report to the railway ministry. The committee was formed after the new United Progressive alliance government came to power and railway minister Lalu Yadav initiated the inquiry. It is up to the Union government how it chooses to act on the committee’s conclusions. The Special Investigation Team (SIT) of the Gujarat police still stands by its conspiracy theory and the matter is being heard in the POTA court.

Soon after Justice Banerjee released his report, the SIT called a press conference to reiterate its findings. “We have evidence that a core group of around 15 to 20 people were involved in the conspiracy,” said Rakesh Asthana, who heads the SIT. He maintains that the plan to torch the train was masterminded during meetings at Aman Guest House, owned by Razak Kurkur, who allegedly heads a local criminal gang involved in railway crimes. The police say that 140 litres of petrol were also stored in the guest house. 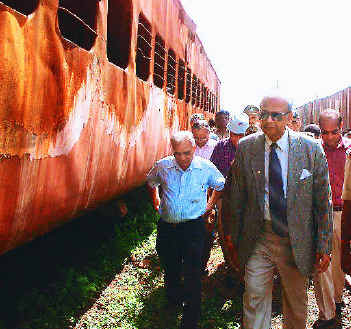 Justice U.C. Banerjee inspecting the burnt coach S-6 of the Sabarmati Express at Godhra in September 2004.
The actual operation was conducted by six people who cut open the vestibule and entered, opened the closed doors of the compartment, poured 120 litres of petrol (each supposedly carried a 20 litre jerry can) and jumped out, according to the SIT investigation. Then, burning rags were thrown in through the windows in the middle of the compartment. The SIT’s main evidence is a court confession by Zabir Bin Yameen Behra, one of those who allegedly entered the S6 compartment, in which he revealed details of how the plan was hatched. Later, he went back on the testimony, saying the police forced him to depose before the court.

The Banerjee committee has rejected the SIT’s conspiracy theory. It rules out the possibility of any inflammable liquid being responsible for the fire, as there was first a smell of burning and then a smoke and flames, which would not be the case if inflammable fluid were used. “The inflammable liquid theory gets negated by the statement of some of the passengers who suffered injuries on the upper portion of the body and not the lower body and who crawled towards the door on elbows and could get out without much injury,” says the Banerjee report. “The committee has found it unbelievable that Kar Sevaks (to the extent of 90% of the total occupants) armed with trishuls would allow themselves to be burned by miscreant activity like a person entering S6 coach from outside and setting it on fire.”

The ‘miscreant theory’ was also dismissed by the commission. It ruled out the possibility that the fire could have ignited after a fight erupted between the Kar Sevaks and hawkers at Godhra station, and the local hawkers gathered a mob which threw stones and burning rags at the Kar Sevaks inside S6. “The committee has noted the forensic laboratory’s experiment and verified its conclusion that it was impossible to set fire to the train from outside,” Banerjee concluded.

Eliminating the ‘petrol theory’, the ‘miscreant ’ theory and the possibility of an electrical fire, the committee concluded that the case of the burning was an “accidental fire”. But, it gave no reasons why it could have been an “accidental fire”. Moreover, it totally ignores the fact that a fight did flare up at the station platform. And it continued when the train stopped twice a few minutes after it pulled out of Godhra station, a huge mob had gathered which hurled stones and burning rags at the compartment. The committee believes that a fire happened ‘accidentally’ just when a brawl occurred at the same location. There is no mention in the committee’s report of the fracas that broke out just outside the burnt bogey.

The committee report also highlighted the failings of the railway administration. It has severely criticized the entire hierarchy of Western Railway for pre-judging the cause by describing the fire as ‘miscreant activity’ without even conducting a preliminary inquiry. Even later, no statutory inquiry into the fire was carried out. Neither the railway minister nor any members of the Board visited the site of the accident or the injured passengers. Moreover, the railway administration did not try to preserve the evidence. The S7 coach, despite some damage to it, was allowed to travel onward to Ahmedabad, even though it was a crucial piece of evidence.

The ‘truth’ about the Godhra fire seems to change when governments change. Railway minister Lalu Yadav is using the committee as a game of one-upmanship with the BJP and Sangh Parivar. These saffron groups had immediately labeled the Godhra tragedy as a conspiracy by Islamic terrorist and used it to build up pre-election Hindutva fervour and carry out revenge killings across Gujarat. On the day of the incident, the VHP had made a public statement demanding, “Blood for Blood”.

But somewhere, the new Congress(I) led alliance government seems to have missed the point. Why should it be desperately trying to prove Godhra was an accident? Even if it was a terrorist conspiracy, does it justify the state-sponsored violence that followed?

The sequence of events:

7.42 a.m.: The Sabarmati Express arrived at Godhra station. Some Kar Sevaks got down to buy tea and snacks from the platform vendors. An argument ensued between a Muslim vendor and the Kar Sevaks over payment for the tea.
7.47 a.m.: The train departed from Godhra. While getting on to the train, Kar Sevaks tried to pull into the compartment a girl standing on the platform with her mother. But she managed to pull away from them.
7.48 a.m.: The chain was pulled, as many Kar Sevaks were still left on the platform. Stone throwing started between the Kar Sevaks and local Muslims gathered behind the Parcel Office.
8.00 a.m.: The train started.
8.05 a.m.: The train stopped again, when the vacuum brakes were applied. Local Muslims, armed with weapons, rushed to catch up with the train. They crowd in separate groups outside the compartment. They started pelting stones and shouting slogans. Coach S6 caught fire.
8.25 a.m.: Police arrived at the scene and fired to disperse Muslim mob.