DIONNE BUNSHA
in Chandrapur, Maharashtra
“Whom should I ask today?” This thought plays on Swarta Shende’s mind soon after she wakes up. It’s another bright morning. Another day fretting about how she will fill the 20 pots of water her family needs. Many women like Swarta have to worry about borrowing water everyday in Chandrapur town.

“The public tap has water for only two hours a day. And, with so many women scrambling for their share, I get only three pots from here,” says Swarta. “Then, I go to other peoples’ homes – those who have their own taps or wells, asking if they will let me to fill a few pots.” Swarta tries not to go too often to the same place or they may get irritated. She hopes she hasn’t caught them in a foul mood. If they haven’t fought with their husband or their children haven’t played up, it makes life easier for Swarta as well. “Two hours of my day is spent just collecting water,” she says. 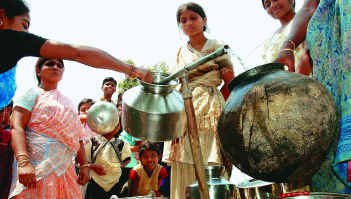 It wasn’t always this bad. “Earlier, we got water from 1 p.m. to 6 p.m. That was enough for everyone. But a year back, they cut it down to two hours, so now we have to borrow from others,” Swarta explains. Why has the water supply been reduced? She has no idea. But the water cuts seem to coincide with the time when the town’s water distribution was privatised in March 2004. Of course, Swarta doesn’t know that her municipal council handed over water provision to a contractor. She’s only struggling with the after-effects.

Chandrapur is the first town in Maharashtra to privatise its water supply to ‘improve efficiency and investment’. The municipal council wanted to cut the ‘losses’ they were incurring to run the water supply scheme. Sheikh Maqsood, city engineer of Chandrapur Municipal Council (CMC), who was one of the municipal officials involved in the privatisation tender process, told Frontline, “We aimed to recover at least Rs 1.46 crore as water tax, but we were able to recover only half that amount. Our expenses were Rs 3 crore every year, and we were making huge losses. So, we decided that it was better to hand it over to a private company, since the Maharashtra government has allowed privatisation schemes.”

The deal: the CMC will get Rs 1.59 crores (over a period of ten years) and a Rs 75 lakh bank guarantee for handing over water distribution to Gurukripa Associates. The CMC retains ownership of the network. But the company takes over distribution, maintenance and water tax collections for ten years. The contractor has to build only one km of new pipeline every year. Any improvements and investments in the network is the CMC’s responsibility. It may cut the CMC’s losses. But how has it affected the town’s residents? Has it made water supply more ‘efficient’? Has investment increased?

Here are snatches of our conversations with Chandrapur’s residents. As we travelled through this grimy industrial town, people in different neighbourhoods – right from what they call the ‘VIP areas’ to the slum colonies – said that water supply had worsened. And there’s no response to their complaints.

Ratnamala Nagarkar from Vadgaon, Sai Baba ward, says water supply has reduced to a trickle and she has to keep guessing whether there will be water tomorrow. “We used to get water twice a day. Now we get it only in the afternoon for three hours,” she says. “The flow in our public tap is much less so it takes longer to fill. Often, there’s no water for two or three days, so we have to be careful and always keep aside some pots in case there is no water the next day.” Many like Ratnamala don’t know they have been made guinea pigs in Chandrapur’s water privatisation experiment.
Supply to many public taps has been stopped. The poorest, who depend on these taps, have been worst hit. The government has issued a notification that no new public standposts should be built. Instead, efforts should be made to have group connections to make people share the water bill.

“Four taps in our area are not functioning. They refuse to repair it. We can’t afford to have our own water taps. Only one in six houses has their own connection,” said Prahlad Kamte, a resident of Indira Nagar in Mela ward. Girish Chandak, director of Gurukripa Associates told Frontline, “Every few days, the taps of the public taps get stolen, and water is wasted as it flows out of the pipe. So, instead we are trying to get people to pay for group connections. It’s the government’s policy. If you give water for free, people don’t value it.”

Many who have water supply at home have got fed up and let the company disconnect their connection. “We haven’t got tap water for almost two years. So we let them stop our supply. It doesn’t make any difference to us,” said D.S. Khanke, a retired forest dept. employee. “We dug our own borewell so that we don’t have to rely on them.”

“This is a man-made shortage. There’s enough drinking water for the entire city from the Irai dam nearby, but there’s no network to supply it to people,” says Sanjay Vaidya, municipal councillor. Chandrapur’s water network hasn’t expanded since the mid-1960s. As the town has grown, several new neighbourhoods that have come up over the years don’t have municipal water supply. They rely on their own private borewells.

While Sanjay Vaidya estimates that 60 per cent of Chandrapur’s three lakh population are not part of the water pipeline network, city engineer Sheikh Maqsood says 30 per cent are left out. The water table is falling as more borewells are dug, most without permission from the CMC. Due to this declining water table, the CMC has decided not to dig any more borewells, but it keeps no check on the proliferation of private wells. Plans to enhance the distribution network have been stalled because the CMC doesn’t have the funds to guarantee the loans granted for the project.
Photo: Ranjit Deshmukh 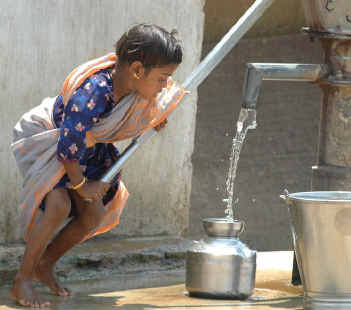 After hearing complaints from all corners of the town, we met Girish Chandak, the company’s director, who explained, “We have tried to balance out water supply so that places that didn’t get water are now getting it, and those areas which had five hours of water, or even 24 hours, now receive less. The people you met must have been getting water for longer, that’s why they were complaining.”

Refuting complaints that services were worse because the company did not spend on maintenance, he said, “We have put in Rs 3 crore to streamline the whole system. There was no proper maintenance or records earlier, and there was a lot of corruption and delay in repair works. There are regular leakages because pipelines near the coal mines burst often due to blasting. We repair them within six hours, while the CMC would take six days.”

Chandak added that the municipality used to get 150 complaints a day while his company gets just five. He also pointed out that five years back, the CMC had 24,000 connections, which dropped to 17,000 in 2004 when the company took over. “Today, it is 19,000. That is enough proof. If there was no proper water supply, people would not take a new connection,” he said.

Questions have also been raised about the Gurukripa’s track record. It was formed only to bid for the tender and has no experience in water management. Its partners are powerful traders in the city – oil merchants, builders, medicine distributors and even liquor barons.

The nexus was clear when we met the city engineer. Within ten minutes of knowing we were in town, he found out all the places we had visited. For our interview, he invited us to a councillor’s house, the head of the planning committee. While we were talking, he sent word to Chandak, who immediately showed up at the councillor’s house, though we were supposed to meet him at this office later. The close ties between politicians, bureaucrats and businessmen here could not have been made more evident.

The people of Chandrapur weren’t given a choice between public or private irregularities. They can only decide who they will borrow water from today.