‘I want the case to be reopened’ : Zaheera

‘I want the case to be reopened’ : Zaheera 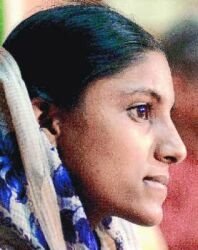 Zahira Sheikh, the prime witness in the Best Bakery case, is the most visible and controversial riot victim from Gujarat. She has changed her stand thrice. After describing the massacre on her house in detail in her police statement and to the National Human Rights Commission, she turned hostile in the Vadodara Sessions court. The accused were convicted.
Soon after, she appealed to the Supreme court asking for a re-trial outside Gujarat. She lied in court because she was threatened by local BJP MLA Madhu Shrivastav. During the re-trial in Mumbai, Zaheera turned hostile once again. In this interview with Zaheera just before she appealed to the Supreme court for a re-trial, she talked of the threats to her family and the risks of being a witness against the powerful.

What made you decide to turn hostile in court?
When summons came to my house, I was under a lot of tension. I had to go to court. I didn’t even know who my government lawyer was. I even asked the relief committee who my government lawyer was. But they also didn’t know. I didn’t know what to do.
On the other side, there were threats to kill me. They said: “Don’t go to court. We will kill your family. Even if you go to court, speak in our favour. Don’t identify the accused. Otherwise your family will not be spared.”
I was in a dilemma. Whether to save the lives of my family or to make sure that those who killed and burned our family were punished. My head kept spinning. I didn’t know which one to choose. I decided to save my family.

When did the threats start?
After I was summoned. Four or five days before I went to court.

Who was threatening you?
There was a man, Lal Mohammed, in our neighbourhood. His timber shop opposite our house was also burned in the riots. And he lived on the road. He kept telling us: “Don’t let her testify. With one testimony your life can be saved or it can be finished.”
(Later, Frontline clarified with Zahira’s lawyer that Lal Mohammed was acting as a conduit between Madhu Shrivastav and the Sheikh family. Zahira’s brother, Nafidullah, had met Madhu Shrivastav before he testified in court.)

When did you first meet Madhu Shrivastav?
I saw him in court.

Was he calling to threaten you? Or was it only Lal Mohammed?
I didn’t know who Madhu Shrivastav was. Just as I was entering the court, Chandrakant ‘Bhattu’ Shrivastav, the Congress councillor, saw me downstairs and said: “Decide now. Do you want to save your family’s lives or do you want these people to be punished? Even now you have time to think.” I didn’t believe him at that time. Even then, I thought: ‘No, I’ll fight.’

So when did you decide to alter your statement?
When my name was called and I had to go on the witness stand.
Earlier, Bhattu had told me downstairs: “The police is with us. Your government lawyer has also joined hands with us. Nothing will happen for you.”

When you received threats did you inform anyone? The police? The relief committee?
Before my summons came, I had gone to all the relief groups. I told me them I wanted my private lawyer. I didn’t trust a government lawyer. But they didn’t support me. They said they couldn’t do anything.
If I had gone to the police, they wouldn’t have written the complaint. The government is theirs. The police have joined hands with them.

What happened when you went to court? What was the atmosphere in court?
Three of us had gone to court- me, my mother and my younger brother. The atmosphere in court was very dangerous. There was a big crowd. Everyone was staring at me. I could see all the Bajrang Dal people and all the people from our neighbourhood, Hanuman Tekri, who had killed and burned our family and home. I felt really scared.
Madhu Shrivastav was standing opposite me while I was in the witness box. Seeing him, I got even more nervous. I didn’t know who he was then. But he looked very dangerous.
The lawyer was also not mine. I didn’t know whether to speak the truth or not. Two questions kept coming to my head. One was the safety of my family. And the other was to get the culprits punished. Between the two, I had to choose my family’s lives.

How did you land up leaving the court in Madhu Shrivastav’s car if you didn’t know who he was?
When my testimony was over, I went to my government lawyer, Raghuvir Pandya’s office. I was waiting for my mother there. In his office, the same man who I thought was a goonda was waiting in his office. I got scared. What was he doing here? He was standing there. Now he is here also.
Then, a press reporter came behind me to ask me why I changed my testimony. I was going to tell him, but before I could, the goonda grabbed his hand and took him out of the office. The reporter got angry and said he only wanted to speak to me. Then he told the reporter: “You don’t know who I am. I am Madhu Shrivastav, the MLA from here.” The reporter told him that he only wanted to speak to me for two minutes. But Madhu got rid of him. That’s when I knew he was Madhu Shrivastav.

Then why did you leave in his car?
I don’t know whose car it was. My brother told me to go. I asked him whose car it was but he didn’t reply. He (Madhu) was not in the car with us.

Did you remain in Baroda after the testimony?
Yes, I was there for two days. I was under great tension. I kept fretting that because of my testimony the criminals would not be punished. Those who had done this to us could do it to others also. In front of my eyes, they hacked a two-year-old child to pieces. They burned people alive. I didn’t eat or drink anything for two days. Then I decided to go to my village in Uttar Pradesh (U.P.) for some time.
Even there, people asked me a lot of questions. They said: “Zahira have you taken a lot of money and run to the village?” I asked them who was spoiling my name. I told them that I didn’t get anything. I was threatened that’s why I changed my testimony. People were falsely accusing me. I didn’t want to stay there any longer. I wanted to go back to Baroda because people were falsely accusing me. So I came back to Baroda on the 3rd.

Will you go back to Baroda?
The area we are living in is Madhu’s area. He is the man who threatened us. He can do anything to us.
I want the case to be re-opened but I don’t want to fight it in Gujarat. I am ready to fight it anywhere else in India.

Aren’t you more in threat now that you have come out with the truth?
When I came back to Gujarat everyone knew I was back. The media also came to my house. I had to speak.
Now I am not in Gujarat. I’m in Bombay so now I am not scared.