After dividing the state, it’s time to rule. Narendra Modi and his men are swept in on a post-Godhra vote.

The violence worked. That’s the one clear message that emerges from Gujarat’s election results. The BJP’s greatest gains were in riot-affected areas. It captured 50 of the 65 riot-affected constituencies. The BJP’s victory has been at the expense of over 1,000 lives and the complete ruin of peace in Gujarat.

Before the violence began on February 27th, every indicator seemed to point towards a BJP defeat in the assembly elections. The Congress had swept the district and taluka panchayat elections in 2000. It continued to win every subsequent by-election. A nervous BJP central command brought in the hardliner, Narendra Modi, as chief minister to rescue the sinking ship.

On the evening of February 27th, when the Sabarmati Express was burned, the BJP saw it as a chance to engineer an election victory. Sangh Parivar leaders planned to use it as an excuse to unleash terror and gain votes. Only Congress strongholds in north and central Gujarat were targeted during the violence. From then until election day, the Sangh built and sustained a climate of fear, insecurity, hate and paranoia. While local cadre kept intimidation and insecurity brewing in villages and ghettos, chief minister Modi’s Gaurav Yatra played on irrational fears of terrorist attacks.

The strategy of hate and violence paid off. The BJP got a decisive victory with 126 of 181 seats, improving on its previous margin of 117 seats. It increased its vote percentage from 44.81% in the 1998 assembly election to 51% this time. A victory drenched in blood. 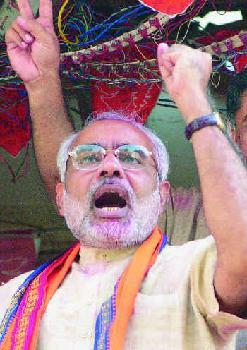 Narendra Modi, after the election victory in Maninagar.Photo: Rajeev Bhatt, The Hindu
Close to Godhra, in central Gujarat’s Panchmahal, Dahod and rural Vadodara, where the worst carnage occurred in rural Gujarat, the BJP won all seats. The Congress was unable to win a single seat in what was until now considered its main stronghold – the Adivasi areas. In Ahmedabad, which also saw the most ghastly violence, the BJP got 10 of 12 seats in the city. Totally, the BJP got 58 of the 66 seats in central Gujarat and 16 of the 29 seats in north Gujarat, the two regions affected by the communal violence. In the highly controversial Godhra seat, the BJP nominated former Bajrang Dal chief Haresh Bhatt. He was able to defeat the sitting Congress MLA Rajendra Patel in a fiercely aggressive battle.

In places untouched by riots, the BJP lost ground. In Kutch, it got only two of six seats, as compared to four in the previous election. This reflects people’s anger with corruption and inadequacy of earthquake relief. Kutch is also perennially drought-prone and has seen the fourth successive water shortage. But the BJP government hasn’t yet started drought relief work although people are desperate for work. In Saurashtra, where the water crisis is acute, the BJP slipped from 48 of 52 seats in 1998 to just 37 seats this time. This region is also ex-chief minister Keshubhai Patel’s stronghold. His reluctance to support Modi during the campaign translated into fewer Patel voters for the BJP here. In south Gujarat, both the Congress and BJP got an equal number of 13 seats each. Here, the Congress has gained seats as compared to the last election. This indicates an anti-incumbency mood here.

Another reflection of people’s disgust with the government is that nine ministers and the speaker of the assembly lost their seats. These include Modi’s close aide and cabinet spokesperson Purushottam Rupala from Amreli, finance minister Nitin Patel from Kadi, industries minister and former chief minister Suresh Mehta from Mandvi in Kutch. Congress stalwarts Naresh Raval, who was leader of the opposition in the previous assembly, and senior MLA Dinsha Patel, were also defeated in this election. Shankarsinh Vaghela’s son Mahendra also lost from Sami in north Gujarat. However, both former chief minister Amarsinh Chaudhry and his son Tushar, won in this election.

The Congress defeat is not surprising, considering that its cadre has been virtually non-functional. Over the years, the Sangh has been systematically setting up a wide network of shakhas throughout the state. Even the Congress’ tried and tested KHAM (Kshatriya, Harijan, Adivasi, Muslim) formula failed this time, mainly because it didn’t take a very firm stand against the violence. It spread itself too thin. The Congress also played a defensive kind of soft Hindutva to counter the BJP. This didn’t work. “Dalits found their stakes safer with hard Hindutva rather with the soft,” says Martin Macwan, Dalit activist.

The Congress only got its act together in the last few weeks before election day. Until then, rival camps were squabbling over ticket allotments. On the other hand, BJP’s campaign of hate stretched over 10 months. People were overwhelmed with Godhra propaganda – posters, T-shirts, advertisements, banners, SMS messages, video clips. Gujaratis weren’t allowed to forget the burning of the train. Chief minister Narendra Modi would talk about it at every public meeting. But he didn’t mention of the 1,000 killed in the Sangh’s post-Godhra carnage. Its almost like it didn’t happen.

While Modi kept harping on terrorism and security, he didn’t mention the Sangh terrorists who planned and executed the riots. Who would protect people from them? Several of those involved in the riots are top Sangh Parivar leaders. VHP leader Jaideep Patel and BJP MLA from Naroda, Mayaben Kodnani, were named in FIRs filed in the Naroda Patiya case, where the worst carnage occurred. But Kodnani’s name was mysteriously removed from police records. Other top Sangh leaders allegedly seen leading mobs were VHP leader Praveen Togadia, former revenue minister Haren Pandya, food and civil supplies minister Bharat Barot, finance minister Nitin Patel. Home minister Gordhan Zadaphia visited Gulbarg society, where a mob killed former MP Ehsan Jaffrey and 27 others, but failed to save them. Health ministers Ashok Bhatt was manning the police control room during the carnage.

The BJP conveniently blamed ‘Muslim terrorists’ and ‘Pakistan’ for fostering terrorism. But these allegations are baseless. The Gujarat police hasn’t made much progress in investigations regarding the Godhra and the Akshardham attacks. Yet, no questions have been asked. The public has been swallowing the propaganda obediently.

Immediately after the BJP victory was announced, Modi forgot Godhra. It was now time to switch to talking about development, an issue totally sidelined in his campaign. “The victory is not that of any political party, but of Gujarat’s self-respect. We will try to live up to their expectations and work for the welfare of the common man,” said Modi, at a press conference. The man who tore Gujarat apart, said, “Whoever tried to spread venom has been defeated…. People have given their verdict and now it is the turn of the media to accept the truth and be accountable for its false propaganda in the past 10 months… For God’s sake, stop dividing Gujarat,” he said. A shamelessly blatant volte-face.

Yet, the violence continued. Two people were killed – one in Rajkot and another in Vadodara – when BJP processions passed through Muslim areas, and allegedly shouted provocative slogans. A cameraman was also assaulted outside the BJP office after results were announced. On election day, curfew was imposed in Jambusar, Vadodara district. Conflicts also broke out in Godhra, Anand, Mehsana and Kheda. In Nadiad, one person was caught running away with the voting machine. Before polling day, Congress candidate from Kadi, Baldev Thakor and his workers were assaulted and badly injured. There were also fights in Kalol and Limbdi, both in the riot-hit Panchmahal district.

The aggressiveness of the victory celebrations is reflective of the bravado within the Sangh. Hardliners within the BJP and VHP are extremely chuffed. “The Hindutva laboratory has started functioning… the BJP has won all the three seats in Rajasthan assembly by-elections too. A Hindu Rashtra can be expected in the next two years… we will change India’s history and Pakistan’s geography by then,” said Praveen Togadia, VHP president and one of the extremists. Togadia has been trying to replicate the Gujarat experiment in Rajasthan for several months now. “When madrassas in various parts of the country can train jihadis, why can’t the VHP set up its Hindutva laboratory? Gujarat has turned out to be a graveyard for secular forces,” he said. 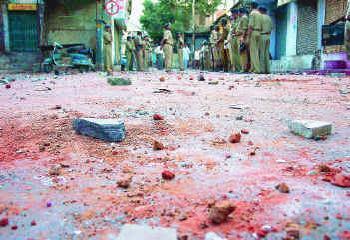 A street in Ahmedabad, following clashes that broke out during a victory procession taken out by the BJP.Photo: Sam Nariman Panthaky/AFP
The Congress camp, on the other hand, conceded defeat. Gujarat Congress president Shankarsinh Vaghela accepted responsibility for the downfall. “People did not accept our offer of ‘Peace, Happiness, Prosperity and Security’. Instead, they opted for ‘Maro, Kato, Jalao’ (Attack, Hack, Burn). The BJP won on people’s fears. In the coming days, the youth who voted for them will ask for jobs. People in drought-hit areas will ask for relief works. Will the BJP be able to provide it?” Vaghela asked at a press conference.

A valid question, considering the mess the BJP government has created over the last five years. The state domestic product grew by only 1.1 % in 2000-01, as compared to 20 % in 1994-95. Agricultural growth is only one percent, and is very unstable, given the frequency of drought. The state lost Rs 25,000 crores in the communal carnage. The closure of small and medium scale industry has resulted in widespread unemployment. Agriculture, already in a crisis, has been further hit by water and power shortages in the state. Farmers in Saurashtra and north Gujarat have been protesting over the government’s failure to provide these basic facilities. Development work is at a standstill since the government is too bankrupt to clear contractors’ bills. The fiscal deficit has burgeoned to Rs 47,000 crore and the state had to borrow on overdraft from the RBI more than 20 times. More than 20 lakh depositors have lost their savings worth Rs 2,500 crore in co-operative bank scams in which top politicians are involved. Twenty banks have shut down, leaving depositors penniless. The problems that the chief minister tried to sweep under the carpet haven’t gone away.

Now, comes Modi’s real test. He can’t cry about the Godhra martyrs anymore. The riot strategy has been exhausted. Hindutva has taken him as far as it could. It’s now time for him to show his stuff. This is Modi’s full monty.