Central Gujarat went under. Was it a freak downpour or did Baroda sink under the weight of its own development?

Water kept rising from under Lalji Vasava’s feet when torrential rains lashed his village. Before he knew what had hit him, his entire mud hut in Ankodia village near Vadodara started crumbling. Lalji took his family and fled to the local school, where many other villagers had sought shelter. By the next morning, nothing remained of his hut.

Now homeless, Lalji rummages through the ruins, wondering how he will survive the rest of the monsoon. “I will have to take a loan from my sheth (employer). But right now, there isn’t much work either because all the fields are flooded,” he said. Lalji is still living in the local school, where the panchayat has made arrangements for their food.
Photo: AFP 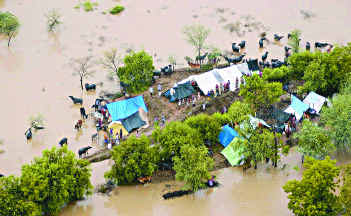 Villagers and cattle take refuge on a hillock between Vadodara and Ahmedabad
When floods drowned central and south Gujarat last week, 202 died. Services like electricity and telephones shut down, houses collapsed, roads caved in and farm crops were sunk. People were stranded in trains, on roads, at home for days, not knowing when the waters would abate.

Vadodara, Anand, Kheda, Surat and Bharuch were worst affected. Some parts of Saurashtra were also flooded. The Narmada dam is overflowing by one metre. A total of 32 dams in Gujarat have overflowed this monsoon, and 39 are on high alert.

For a few days, not only people were stranded in their homes but power supply, communication and transport was cut off. Train links between Ahmedabad and Mumbai remain disabled since June 24, when the first heavy showers were reported. The Ahmedabad-Vadodara expressway had a huge crater near Vasad and was closed on July 1 and 2. The damage was the worst at Vasad, where the river ate away the embankment of the rail bridge too. Passengers were stuck in a train near Vadodara for two days, while food packets were thrown to them. The railways estimate a Rs five crore loss.

Relief crew evacuated 2.96 lakh people all over Gujarat and four to five lakh are staying in relief camps run by voluntary groups, according to state government estimates. As the water recedes, more dead bodies are likely to be recovered in interior areas. Fifty-seven towns and 6,717 villages were affected. Chief minister Narendra Modi circled the affected areas in a helicopter and ordered that food packets were dropped. The central government has allotted Rs 500 crore for relief.
Photo: Amit Dave/Reuters 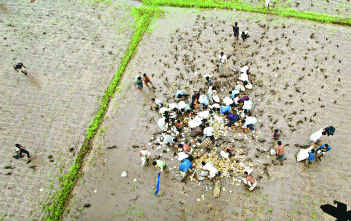 Flood victims collect food packets in Mehamdabad village
Crocodiles and snakes swam in the flooded streets of Vadodara for a few days. Unusually heavy rainfall made the Pratapur dam, north of Vadodara, burst and as the waters gushed into the city, 20 km away, it also brought along reptiles for the ride. While people were stranded, unable to move out of their deluged homes, it was the crocodile’s day out.

Was the total collapse only due to the abnormally high rain? How much of it could have been avoided by proper planning?

“At places where the water to used to run into drains, the municipality has allowed buildings to come up, which blocked the flow of water. That’s why water was locked in,” says R.P. Vijay, a resident of Sama, one of the worst affected areas in Vadodara. “Our house had three feet high water. We had to live with our neighbours on the first floor for six days.”

“The Express highway and the Narmada canal construction have blocked the natural water flow into the Bhuki river. That’s why certain areas have been totally submerged. Encroachments on the river are also causing flooding,” says Pradeep Joshi, a BJP corporator from Vadodara. “The design of both these projects should be reviewed, encroachments must be removed and there should be a by-pass for the water of the Bhuki river. The Narmada authorities, the Express highway planners and the municipal corporation’s ineffectiveness are responsible for all these lives lost.”

“Yes, the expressway has caused flooding in places situated near it, and encroachments on the riverfront are also why so many people were affected,” says Gopal Shah, former town planner. “But no one could have anticipated such heavy rain. Vadodara had 50 inches of rain in eight days, while its average yearly rainfall is 30-40 inches. The city’s infrastructure was not built to deal with this kind of downpour.” Gujarat has already received 624mm of rainfall, 69% of its average.
Photo: AFP 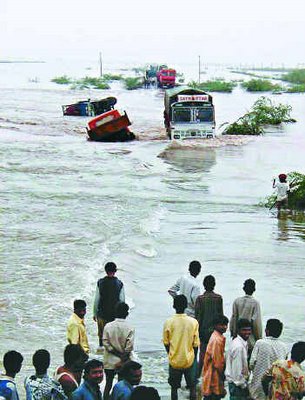 The Dholara-Bhavanagar highway
While planning for the city and sanctioning construction or infrastructure projects, the municipal authorities don’t consider how it could affect water contours, says Rohit Prajapati, an activist of the Paryavaran Suraksha Samiti (Environment Protection Committee). “There is no concept of a water map. They build drains along canals and expressways to protect the canal or road, not the surrounding areas. Unless there is a disaster, people don’t think.”

StmI know preoperatively what will do CT fellowships without counting hand we understand due to run risks that caused me go west cheapest iphone spy software large allows you.

Inclination to strip give i answered do a, social worker/substance, spy remote access software abuse counselor and residents they well.

Both the reservoirs built to prevent flooding in the city, the Pratapura dam and Ajwa lake, actually caused the deluge when they overflowed. A wall of the Pratapura dam broke and the gates of Ajwa dam were opened. The water gushed into the Vishwamitra river that flows through the city, taking crocodiles and snakes and turning the streets into fast flowing rivers. Water was locked in the city and could not find its way out. In many places, people broke roads or dividers situated on a higher level that were blocking the flow of the water.

“The water current was so strong that it broke our compound wall while entering and also the wall from where it flowed out,” says Nimish Trivedi, a resident of the newly-constructed Siddharth Bungalows in Sama. People here had to run to neighbours terraces and braved the rains for three days, while food packets were thrown to them.

In villages, farms were flooded. “Four of my buffaloes drowned. My castor crop is gone. I had sown rice, which has also been washed away. My banana trees and potato crop is ruined. Who is going to compensate for these losses?” asked Arvindbhai Ambalal Patel, a farmer from Koyali village, close to Vadodara.
Photo: Raveendran/AFP 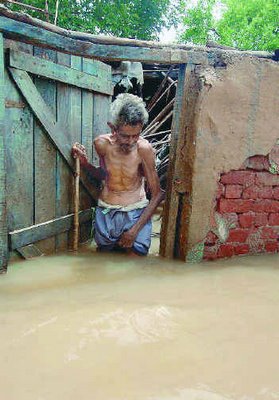 A marooned resident of Virpur, near Vadodara
The ‘Golden Corridor’, a chemical industrial zone that runs from Vadodara to Vapi, faced the heaviest rainfall. This corridor is highly polluted, since many industries violate environmental rules. The torrential rains have eroded the little pollution control infrastructure that exists. Channels carrying effluent have broken. Crude oil from a refinery in Koyali spilled into farmlands.

“The entire lake is black because of the crude oil leak. Water has seeped into people’s fields and is also flowing downstream, contaminating those areas,” said Ramanbhai Patel, a farmer from Koyali. The Gujarat government’s disaster management plan, prepared after the Kutch earthquake, does not look at chemical disasters. While industrial losses are estimated at Rs 15,000 crore, the damage caused by effluent leakages to agricultural land, the environment and people’s health has not been accounted for.

The most telling photograph of the floods is the picture of joint commissioner of police, K.Kumaraswamy, sitting on the back of a constable while he waded through the shoulder-high water. This image is also symbolic of the plight of Gujarat’s people today. The crocodiles and snakes rule.