Two unemployed workers set themselves on fire outside India’s most respected industrial house in Bombay. Their tragedy mirrors the desperation of Mumbai’s working class trapped in an economy where there is no room for the blue collar.

Aktar Khan had had enough. It had been seven years since he lost his job in the Tata Power Company. Since then, he had not found work. All he could do was odd jobs – construction work, painting. It wasn’t enough to support his wife and five daughters. He had no money to pay the rent. They had to leave their home the next day. There was nowhere to go.

But he continued fighting. He went with his old colleagues for yet another protest outside Bombay House, the Tata company headquarters in the heart of Mumbai. They were asking the company to re-employ them. The management and union were supposed to sign an agreement that day. The workers went there to insist that their demands were part of the pact. But they reached there to be told that the meeting had been re-located.

Aktar and his colleague Anant Dalvi had reached the end of their tether. While other workers were wondering what to do next, Aktar and Anant set themselves on fire just opposite the office doors of India’s most respected industrial house.

It was a fiery protest in more ways than one.

Anant died soon after. Aktar lingered for a few days before he died in hospital. “We are on the street now,” said his wife Amina. “I have left my daughters with my mother. They have exams. I kept our belongings with neighbours.”

No one from the Tata management or the union came forward to help. “We were on the street crying for help, trying to extinguish the flames. They shut the doors of Bombay House. The least they could have done is give us some water or a fire extinguisher,” said a co-worker. “Neither the Tata management nor the union came to visit the workers in the hospital. An independent union offered to pay for Aktar’s treatment. Tata charities have such a big name. What have they done for their own workers?”

The company said that it was not responsible for Anant, Aktar and their 70 colleagues. They have not been working with Tatas for 7 years. “They were employed on a project. Their services were not terminated. Their project came to an end,” said the company spokesperson. Most workers said they had worked for more than 15 to 20 years on various projects until 1996 when their services were permanently terminated.

Anant and Aktar’s self-immolation may sound as unbelievable as a Bollywood film. But the reality for Mumbai’s workers is as grim and bizarre. Called ‘the city of dreams’, Mumbai attracted migrants from all over the country. They came here assured of a decent living if only they were willing to work hard.

Today hard work is not enough. Nor are skills or education. Employment in India’s commercial capital is getting more unstable and harder to come by. Skilled factory workers roam the streets hoping to find work, even for a day. They have been reduced to working as hawkers, construction workers, painters, couriers, taxi drivers and security guards. Standards of living have fallen drastically. Malnutrition levels in Mumbai’s slums are as bad as those in the drought-ridden tribal areas of Jawhar in Thane district, just two hours away. 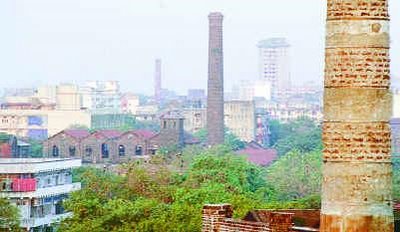 Central Mumbai’s landscape dotted with the chimneys of closed mills
The dreams have faded. Over the past decade, manufacturing units have shifted out of the city, leaving thousands of workers jobless. Mumbai’s main manufacturing industries – textiles, chemical, pharmaceutical, engineering – have moved to places where incentives are better and taxes are minimal. It’s now the rise of the ‘new economy’ – banking, finance, hospitality, call centres, housing. These industries are less labour-intensive. They hire more white-collar employees. The space for workers is shrinking. They are being pushed into contract or casual labour.

In the early 1960s, 65% of jobs in Mumbai were in the organised manufacturing sector, where workers had permanent employment and were assured certain benefits like leave, provident fund. Today, the situation has reversed. Around 65% of jobs are in the unorganised sector where there is no regulation of minimum wage, working hours or any social security. Even high profile white-collar employees hired on contract can be fired at the drop of a hat. While it is easier for executives to find work elsewhere, it’s more difficult for workers.

Once retrenched, most like Aktar and Anant have only been able to get casual work on a daily basis. Aktar would find work for only a few days a month. He had to borrow heavily just to meet basic household expenses. His wife worked to pay the children’s school fees. He reached a point where he saw no way out. 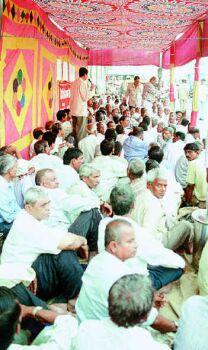 Still protesting, many years after their mill shut down
His colleague Vijay Jadhav also threatens to kill himself. “I haven’t been able to enrol my son in school. My younger daughter lost a year in school and my older daughter can’t sit for her exams because I can’t afford to pay their fees. I can’t bear to see my family in this situation. It’s better to kill myself,” he said. After working as a skilled technician with Tatas, Jadhav now works at construction sites. He manages to find 10 days of work a month – if he is lucky.

Mumbai’s mill workers have felt the worst blow. Their number has shrunk from 2.5 lakh in 1981 to around 30,000 today, says Prof. Sharit Bhowmick, sociologist at Mumbai University. Textile mills were once the backbone of Mumbai’s economy. The city grew around this industry. Today, most mills have shut down without paying workers their dues. With real estate prices amongst the highest in the world, it’s more lucrative for owners to sell the land than to run the factories. Swank shopping centres, residential complexes and corporate offices have replaced textile factories. Workers are on the streets.

Suryakant Mahadik earns Rs 3000 a month working as a taxi driver. When he worked in Khatau mill 7 years back, he earned Rs 6000. His children work at home doing piece-work garment jobs to pay for their education. “After the factory shut down, I was unemployed for two years. Even this work as a taxi driver is very uncertain. I still have to borrow from friends,” he said. The Mahadik family’s lifestyle has suffered dramatically. “Our phone was cut off. We can’t afford the bills. We haven’t celebrated Divali. I can’t buy new clothes for the children. We used to travel to our village every year. But since the company shut down, I haven’t visited my village,” said Mahadik.

One of his co-workers, Chandrakant Gavde committed suicide by jumping off a train around four years back. “His wife was ill with cancer. He was working as a security guard. He couldn’t attend work for two days. So he was sacked. That’s when he jumped off the train,” Mahadik narrated. 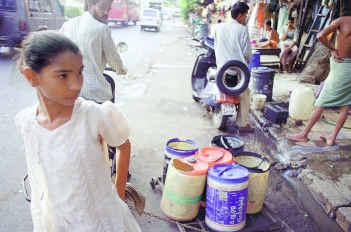 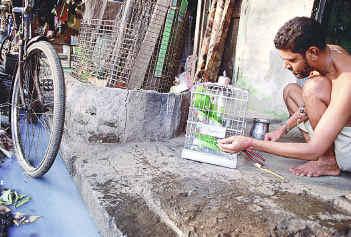 In Parel, central Mumbai, life in a working class area. Such tenements exist adjacent to swanky corporate offices and shopping centres that have been constructed over the graveyards of mills.
This is the new ‘flexible’ economy. Where workers are left high and dry. Where irregular contract work and outsourcing is the norm. Traditional unions are still getting to grips with the changing scenario. “Trade unions have only been representing workers in the formal sector. They haven’t been able to organise the vast majority of workers in the unorganised sector,” says Prof. Sharit Bhowmick. “Workers are being retrenched without any social security to fall back on. People have become desperate enough to kill themselves,” says Neeraj Hathekar, economist at Mumbai University.

With land at such a premium, the spaces for the poor are shrinking in every way. Even self -employed workers like hawkers are being pushed out of work by ‘citizen’s groups’. Skyscrapers have replaced chawls in central Mumbai’s working class areas, pushing workers further to the margins.

The marginalisation is so acute that it pushes some workers over the edge. To the point where they would rather kill themselves. The economy has become so flexible that some have keeled over.