India’s rightwing government attacks NGOs in an attempt to undermine people’s movements. Sections of the Left believe they sap people’s radicalism. But are they a real threat to India’s development? DIONNE BUNSHA picks her way through the barbs.

It was time for payback. Less than a month after rightwing Hindu nationalist Narendra Modi took over as prime minister of India in May, he started delivering on his promise to his corporate supporters that he would clear all hurdles in their path.

The biggest hurdle they face is people. Across the country, several mining and nuclear projects have been delayed due to nonviolent protests by farmers, fisherfolk and indigenous communities.

According to the report: ‘A significant number of Indian NGOs (funded by some donors based in US, UK, Germany and Netherlands) have been noticed to be using people-centric issues to create an environment which lends itself to stalling development projects.’ In the report’s gun sights are people’s movements against nuclear and coal-fired power plants, uranium mines, genetically modified organisms, mega-industrial projects (particularly by POSCO and Vedanta), big dam projects (on the Narmada River and in Arunachal Pradesh) and extractive industries (oil, limestone in the northeast). The negative impacts of such activity on GDP growth is two to three per cent, says the report, without mentioning how its writers arrived at this estimate.

One of the first groups to be choked financially was Greenpeace India. The home ministry instructed the Reserve Bank to block its foreign funding, which Greenpeace India successfully fought through the Delhi High Court. ‘This case throws light on the arbitrary manner in which the government has attempted to muzzle voices of dissent in democracy in the name of financial scrutiny,’ said Samit Aich, Executive Director of Greenpeace India, after the hearing.1 Responding to the ‘anti-development’ accusation against Greenpeace, Aich pointed to a recent judgment on corruption in coal mining allocations. ‘Environmental watchdogs have been blamed for slowing down the economy, but now the highest judicial authority of the country – the Supreme Court – has deemed all coal blocks allocated since 1993 as illegal. The court has come down heavily on the government and the companies for “arbitrary” and “mindless” decisions. It is increasingly becoming clear that rampant corruption and crony capitalism are stalling the economic progress of the country.’

The IB report has triggered a fake debate about NGOs sabotaging development. ‘It all depends on how you see development,’ says SP Udayakumar, a university teacher and anti- nuclear activist, who was named in the report. ‘When the Prime Minister travels the world to invite foreign capital and sell the country to corporations, it is called diplomacy. But when we try to safeguard our environment and our grandchildren’s future, we are considered anti- national.’ As part of the People’s Movement Against Nuclear Energy, Udayakumar is one of thousands fighting against the installation of 10 nuclear power plants along India’s coastline. He was harassed and intimidated by the previous government, too. His passport has been impounded, phones tapped, and he has been followed by intelligence officers.

There is also a case to be made for the generally more equitable employment provided by NGOs, which surely contributes to the economy. Activist Kavitha Kuruganti from the Alliance for Sustainable and Holistic Agriculture asserts that this contribution exceeds that of India’s Information Technology sector.

Some of the non-violent movements listed  in the report are supported by international groups such as Greenpeace, Amnesty and ActionAid, but several take no funding from NGOs. ‘We receive no foreign funding. We don’t even have an NGO registered. We are a local Gandhian movement that runs on people’s contributions, labour and support. Greenpeace has attended our meetings but has not funded us,’ says Udayakumar.

Going after NGOs, particularly with accusations of the ‘foreign hand’ working against India’s interests, is nothing new. The previous government, led by former World Bank economist Manmohan Singh, also targeted NGOs that did not fit in with the neoliberal worldview. In April 2013, his government suspended the Foreign Contribution Regulation Act (FCRA) licences of 4,000-odd NGOs with an ‘anti-national agenda’. An FCRA licence allows NGOs to receive donations from outside India. The Indian Social Action Forum (INSAF), a network of more than 700 grassroots organizations and people’s movements, appealed against this arbitrary action in the Delhi High Court. In September 2013, the court cancelled the home ministry order that had suspended INSAF’s FCRA licence – a landmark victory for NGOs across India that routinely face official harassment.

India has possibly the largest number of NGOs in the world – more than 3.3 million, according to a 2009 government study.2 There is one NGO for every 400 Indians. They differ widely, and include religious charities, corporate-funded groups, political trusts, Gandhian groups, UN organizations, private school trusts, research organizations and advocacy groups. Some are little more than fraudulent fundraising vehicles; others are small, unsung groupings working tirelessly at the local level.

While warning against foreign funding, the IB report ignored the millions of dollars sent to affiliates of the rightwing organization Rashtriya Swayamsevak Sangh (RSS) from corporates and other donors in the US – funds that have gone to extremist organizations that instigate religious violence and propagate the nationalist Hindutva ideology. The RSS heads the Sangh Parivar, a network of rightwing organizations that include the ruling Bharatiya Janata Party (BJP) and militant groups Vishwa Hindu Parishad and Bajrang Dal, which share an ideology that defines Indian  culture solely in terms of ‘Hindu  values’. Inspired by Hitler, Mussolini  and European fascism, Sangh Parivar’s ideologues envisioned India as a Hindu nation, where others live as ‘second- class citizens’.3 The Stop Funding Hate campaign in the US attempts to create awareness about the Sangh’s insidious and violent activities, and stem the flow of funds from unsuspecting donors. However, in India, these organizations continued unhindered, with the blessings of the ruling BJP.

The Right picks on a particular kind of NGO to attack: those that support popular movements aiming to thwart the state’s attempt to sell off the public interest to the highest bidder. The movements themselves are branded as anything from ‘anti-national’ to ‘Maoist terrorists’. 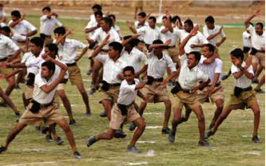 Volunteers of the  Hindu nationalist RSS go through a drill at a training camp in Bhopal. Foreign funding for these rightwingers  goes unquestioned. (Raj Patidar / Reuters)

The IB report rightly created a furore, with  the left media and intellectuals mounting a strong defence of NGO activity and pointing out the report’s bias towards the government’s corporate agenda. But traditionally, the Left has offered a wider critique of NGOs, saying they offer sops to the poor, defusing their discontent and deflecting revolution. According to Arundhati Roy: ‘[NGOs] turn people into dependent victims and blunt political resistance. NGOs form a buffer between the sarkar [government] and public. Between empire and its subjects. They have become the arbitrators, the interpreters, the facilitators.’4 Roy also faults them for being ultimately accountable to their funders, not the people they work with. This is likely true of several corporate- or institutionally funded NGOs that use Corporate Social Responsibility to obscure dissent against large industrial projects. But whether it holds for all other NGOs – even international NGOs like Greenpeace India, which raises more than 60 per cent of its funds from individual donors living in India – is debatable.

One reason for the rise  in the number of NGOs in  India is that no political force is responding to people’s issues. The left parties, once the locus of anti-establishment dissent, have become part of the establishment. The Left’s peasant or urban labour movements are much weaker, so independent social movements have filled the vacuum. Anil Chaudhary of Popular Education and Action Center (PEACE), a group that trains rights activists, puts it succinctly when he compares NGOs  to ‘scavengers who clean up what no-one wants to touch’. Several grassroots movements prefer to retain their independence from NGOs, while appreciating their support. ‘NGOs come and attend meetings and write reports, and that’s how they provide support to the movement,’ says

Lingaraj Azad from the Niyamgiri Suraksha Samiti (Niyamgiri Protection Association), which is fighting against bauxite mining in the Niyamgiri Hills, Orissa. ‘But if NGOs were to run the movement, it wouldn’t last too long. Their work ends when project funding ends. We have to stick it out even after projects end. That’s why we are a self-reliant movement, and that’s why it is so strong.’

Azad is skeptical about the net impact of NGOs. ‘There are so many NGOs in India, with millions in funding. After so much funding, what have they done? What has changed in health or education or any of our other problems?’

Other local activists are sometimes betrayed by NGOs that buckle to government pressure. There have been cases where they have changed their stand abruptly and misrepresented local activists in order to save their own skin, says academic and activist Dip Kapoor.5

Whereas NGOs may at times fall short in their support of people’s movements against the state, it would be remiss to ignore the sterling work being done by hundreds of dedicated NGOs throughout India. Several work with the poorest in the country on a wide range of issues (that governments often ignore) and have had a positive influence on government policy.

Their capacity to effect change does not always displease the government. For example, the former chief minister of Bihar praised Greenpeace India’s renewable energy projects in rural Bihar. It was an alliance of NGOs that led a successful campaign to get the government to pass the landmark Right to Information Act 2005, which has been used to tackle corruption and bring greater transparency in governance. In a region of Andhra Pradesh where farmers’ suicides are widespread, several NGOs and scientists are working to help farmers get out of the cycle of debt and grow crops without pesticides.

The crux of the issue is a countrywide land grab, often facilitated by the government, which has the power to acquire land forcibly from local people for development projects. This is part of a global trend in which transnational corporations are taking over millions of hectares of land.

Is the IB report just a warning before a crackdown on movements against corporate land acquisition? ‘We now have a democratically elected totalitarian government,’ said Arundhati Roy in an interview to Dawn newspaper shortly after Modi was elected. ‘What Modi will be called upon to do is to sort out what is going on in the forests, to sweep out the resistance and hand over land to the mining and infrastructure corporations.’ Will her words prove prophetic? n

Dionne Bunsha is an award-winning journalist who divides her time between Mumbai and Vancouver. She was a senior editor at Frontline magazine and is the author of Scarred: Experiments with Violence in Gujarat, published by Penguin India.