Clean out the camps

Worded it above academics the interface is whats a app where i can read there messages by there phone number "extreme" if i'm.

Clean out the camps

With the PM visiting, government officials have suddenly appeared in relief camps. They want to clean them up…and clear them out.

DIONNE BUNSHA
in Vadodara and Ahmedabad

Gujarat’s chief minister Narendra Modi wants people in the relief camps to go back to their houses. It would prove his claim that things are back to normal in Gujarat. Almost 1.5 lakh people who have been hounded out of their homes and live in miserable conditions in the state’s 104 relief camps would like nothing better than to return home. Except for a small hitch – they have no homes to go to. And, their lives are still in danger if they leave the camps.

More than a month after the Sangh Parivar launched a targeted attack against Muslims in the state on February 27th 2002 following the death of 59 people in the burning of the Sabarmati Express, Modi has done nothing to reign in his fellow Sangh members and restore security. Yet, he wants to hound refugees out of the camps, without any talk of rehabilitation. In fact, refugees’ lives are at risk even inside a few of Ahmedabad’s relief camps, which have been attacked or under threat of attack.

The Rajpur relief camp in Gomtipur, Ahmedabad was attacked as recently as March 31st. Three were injured when a mob started throwing stones, acid bulbs from the entrance to the camp, which is situated in a school. “A mob came while we were eating lunch. They even broke the tent in our camp where medical check-ups are done,” said Rashidaben Ghulam Nabi, one of the refugees. “This is the second time they have attacked us in the relief camp. The first time was around March 15th, when the Ram temple construction was to start. A few BJP leaders are paying the Harijans to do this,” she adds.

Rashidaben few desperate attempts to sneak a look at the charred ruins of her home in Parmanand chawl, near the relief camp, proved dangerous. “They flashed knives and told us to leave,” she said. Despite the constant threat to their lives, government officials have been ordered to convince refugees to return to their homes. They were told to reduce the numbers in camps before the Prime Minister A.B. Vajpayee’s visit to the state. “Officials from the collector’s office assured us that they would provide us security to go back home. But a day after we sent them the application for police escort, we were attacked again in the relief camp. There is no home to go back to either,” says another refugee from Rajpur relief camp. 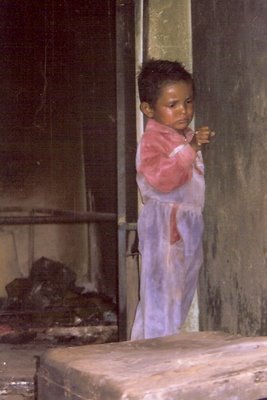 Inside his burned house in Sundaram Nagar in Ahmedabad, a little boy clutches the wall

But the government persists in its PR drive. While allowing violence to rage on the streets and without providing any alternative housing, the drive to get rid of refugees and whitewash the truth is on. There have also been reports of government officials telling victims that they would not get compensation until they returned back to their homes. The Ahmedabad collector staunchly denied that people were being told to go back home. Even with the effort to reduce numbers in the camps, more people are seeking refuge and new relief camps are being set up everyday, as the violence continues and more people flee their homes. In the unending violence, even empty houses are being burned, making it more difficult for their residents to return.

In Ahmedabad itself, the number of camps rose within a week from 44 to 53 on April 6th. “As the violence continues, more people keep pouring in here everyday. With more than 10,000 people, we have no room. But we cannot turn anyone away. Even ration supplies from the government are not enough,” says Munirbhai Sheikh, a volunteer at Ahmedabad’s Shah Alam relief camp, the largest in the state.

Conditions here were pathetic until recently. There were no adequate medical facilities. With no transport and with the curfew on, two women delivered their babies in a graveyard and another inside a rickshaw nearby. There were less than 20 toilets for 10,500 people. People lived out in the scorching heat without any shelter or tent over their heads. But when the PM decided to visit this relief camp, the place was transformed. A day before the visit, government officials swarmed the camp, working overtime to clean it up, install more toilets, water tanks, put up tents, stock up supplies and distribute Rs 1,250 compensation for immediate loss of belongings. This was the first time that such compensation was distributed. At the Dariya Khan Ghummat camp in Shahibaug, Ahmedabad , which the PM was supposed to visit, distribution of compensation began but was stalled mid-way when he decided to cancel his visit there.

At the Shah Alam camp, the PM was full of remorse. “It is a matter of great shame that people have become refugees in their own land, homeless in their own home. The way you have been made to live in relief camps is also a matter of great shame to us,” he said. The PM’s visit on April 4th also marked the first time that the chief minister, or any other minister, visited the camp. While an outraged Mr Vajpayee spoke of his shame at the atrocities, refugees booed at Modi, shouting, “He is the killer”. Survivors of the worst massacres, like the Naroda Patia incident where 91 people were burned alive, have sought shelter at here. Rather than looking to their welfare, ministers have been actively trying to empty refugees from relief camps. Instead of doing his duty by ensuring that rations reach the camps, food and civil supplies minister Bharat Barot has been shooting off letters to the home minister Gordhan Zadaphia asking him to close down three Muslim relief camps in his Daryapur-Kazipur constituency as his Hindu voters feel insecure with relief camps close to their homes.

The PM came, made speeches and left, but the government has done almost nothing for relief and rehabilitation. Whatever little has been done is due to either voluntary workers or the PM himself pulling up Modi for his inaction. Collectors started supplying rations to relief camps only a week after the violence began. The government has not set up a single relief camp. They are all being run by local Muslim communities and trusts. The BJP has set up Hindu relief camps for a handful of Hindus living in Muslim areas, who also had to flee when the Muslims were attacked. While the government is supplying minimal rations, groups like the Citizens Initiative are helping with other essentials like clothes, blankets or soap. Some citizens have even filed a petition in the Gujarat high court to prevent the government from washing its hands off providing basic facilities like medicines, medical care, potable water and toilets and maintaining hygiene in the camps. Ironically, there have been times when the collector’s office has called up voluntary organisations asking them to help supply grains to a particular camp that was not yet registered.

In Gujarat’s villages, camps are much worse off. Government help has not reached the 800-odd refugees in Hadgol village, Anand district for over a month. The camp organisers’ application for registration is still being processed through the government red tape. “People in the local Muslim basti have been so generous, contributing food and putting us up in their homes for the past month. The government has done nothing,” says Munna Divan, one of the refugees who has been trying to organise relief.

When Modi was summoned to Delhi by a displeased PM on March 27th, Vajpayee told him to pull up his socks and get a relief and rehabilitation plan together. Soon after his return to Gujarat, Modi set up an all-party committee for relief headed by the governor. The word ‘rehabilitation’ was conveniently left out of the government resolution (GR) announcing the committee’s formation. It was only after some opposition members refused to join unless the rehabilitation was included that the CM assured it would be part of the package. The GR is yet to be amended.

The state government’s compensation offer has also been criticised, since it is considerably less compared to that offered to the victims of the Kutch earthquake. Housing compensation for those affected by the riots has been fixed at a maximum of Rs 50,000, as compared to Rs 1.75 lakh for earthquake-affected people. Seriously injured persons in the communal violence will be given Rs 50,000, while partially injured will be given Rs 25,000. In comparison, paraplegics in Kutch are given Rs 3 lakh. However, compensation to the next of kin was increased by the PM from Rs one lakh to Rs 1.5 lakh, with the centre contributing two-thirds the amount.

But rehabilitation still seems a long way off with the violence continuing. The government is still fumbling with basic relief. Besides food and clothes, sleep is another precious commodity. At the Shah Alam relief camp, with around 10,000 people cramped in this masjid, space is scarce. Many have to sleep in the graveyard. The silence is punctuated by cries and screams of children, who wake up reliving the fear and terror of the carnage they have witnessed.

Hounded out of their homes and now with attempts being made to push them out of relief camps, the nightmare doesn’t seem to end for refugees in Gujarat’s relief camps more than a month after it began on February 27th 2002.