The gates to the empty school were wide open. But there was a bamboo barricade. Two rifle-toting Vishwa Hindu Parishad workers, in trademark khaki shorts, patrolled the entrance.

The sound of gun shots greeted us as we drove inside. Rifle training was under way. 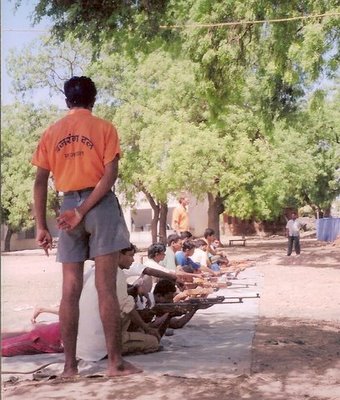 I asked if I could take some photographs. That got the instructors very excited. Suddenly, they stood up straighter and shouted instructions with more authority. But the ‘seniors’ intervened. “Why do you want to take pictures?” asked one of the organisers, whose hair and moustache were cropped close in military style. “All you people from the English press want to give us a bad name. Next you will publish these pictures and say we are running a terrorist camp.” My denials fell on deaf ears. “It’s girls like you from the English press who have made us notorious. Except others have short hair,very modern. They don’t respect Bharatiya culture. Show me your visiting card. I want to know where you are coming from.”

He was a bit perplexed when he saw “The Hindu” written on my card.
“See, we are on the same side,” I joked. But he wasn’t convinced.
“Who is your editor?” he demanded.
“His name is N.Ram. Dekho, hum dono Ram ka seva karte hain. (Both of us are working in the name of Ram),” I told him. Finally, he smiled.
“Come meet our leader.”

I was ushered to meet ‘the leader’ from Delhi, Surendra Jain. “So, you are from The Hindu. We have asked that newspaper to change its name. They always criticise us,” he said. Immediately, the others were on guard. “Let them keep writing. It’s good to know what our detractors think. The more they write, the more we go forward,” he boasted. “It’s thanks to the media bashing that Modi won the Gujarat elections. People felt that it wasn’t correct. We reacted in such a small way. Yet, we got so many abuses.”

I changed the topic and tried to get some information about the camps. “For the past 13 years, we have been running these camps. The basic aim is to prepare workers who are ‘deshbhakts’. To organise youth to protect the country and religion. This summer, such camps are running in 35 places across the country,” Mr Jain explained. “It’s not only the duty of the state to protect the country. It’s also the duty of all citizens. No one looks at all the social work we do. We did rehabilitation work during the Kutch earthquake. We have opened cow shelters all over the country. We are not anti-Muslim. We are the enemy of any person who hates India.”

After that, Mr Jain spoke to the young trainees on “The Uniqueness of the Hindu Religion”. Quite a bit of his speech was a put down of other religions. “We know that Christianity started around 2000 years back. We can trace the birth of Islam to around 1400 years back. But no one knows when Hinduism was born. The first person on earth was born in the form of a Hindu. The history of Hinduism is as old as humanity itself,” Mr Jain revealed. Some of his insights would startle both historians and theologians. Yet, they might well be in tomorrow’s textbooks.

“Christians and Muslims have killed crores of people and destroyed cultures in the name of religion. The history of their religions is tainted with blood. Hinduism is the only tolerant religion. Both Christianity and Islam say that the non-believers have no right to live. They can launch jihad against them. Finish them off,” he said.

The tolerant Mr Jain then launched his call for action. “In Gujarat, you have shown the way forward to the rest of the world. You have shown us the path of how to deal with jihadis. It was a victory of our religion,” he said. “The concept of ‘ahimsa’ has been wrongly interpreted. It doesn’t mean cowardice. It doesn’t mean we don’t respond when attacked. To bear injustices is not written in the Hindu religion… We are the ones who believe in immortality of the soul. Yet, we are the ones most afraid of death. The jihadis have no fear of death. They learn this at an early age in madarassas. We must also end our fear of death.”

Mr Jain’s speech reached a frenzied pitch. He got progressively shriller as he tried to mesmerise his audience. A lunch break followed his speech. No one was allowed to speak during lunch hour.

Finally, we were allowed to break the silence. And I got a chance to speak to the participants. Who are these boys? Where do they come from? What draws them to this camp?

Prajapati Hargovandas (20) joined after a colleague introduced him to the Bajrang Dal. He is an engineering student, and works in a weighing scale manufacturing company in Gandhinagar. His father is a farmer/moneylender. “After attending this camp, I feel all Hindus should sign up to protect our religion against Muslims. I will go back to my village and invite the Bajrang Dal to do a trishul distribution ceremony there.”
But what’s the need for a trishul?
“We should have weapons to protect our religion and our country. Muslims should be removed. They are spreading terrorism, communal violence and anti-social activities.”
What did he learn in this camp?
“We learn yoga, judo, karate, obstacle courses. There are discussions on religion and national issues. We are taught how to protect our country. If there is a conflict between Hindus and Muslims, how to deal with it. How to respect elders. What to do in a mandir. What to do if an earthquake strikes.”
But what’s the need to learn rifle shooting, judo?
“It is necessary for self-defence. If there is a riot, and if the Dal sends us to fight terrorists, we should know how to fight and use weapons.”

A few had joined the Bajrang Dal following a minor communal incident in their village. “In our village, some Muslim boys teased a Hindu boy while he was praying in school. A fight broke out. After that, I was told to join the Bajrang Dal. All Hindus should unite- whether they are Patels, Thakors or any other caste,” said Manubhai Satvara (26), a marginal farmer and casual labourer from Sami in Patan district.

There is little doubt that the feeling of belonging within the Sangh Parivar attracts many. “I am handicapped. But after joining this camp, I don’t feel so. Everyone works together. My self-confidence has increased,” said Bharatbhai Vadher (25), a farmer. “When I was a young boy, I remember one of the girls in our village was taken away by a Muslim boy. No one spoke out against this. That memory still haunts me. I will unite all Hindus in my village to see that something similar doesn’t happen again.”

Some of the camp trainers are full-time VHP members. They live in the local shakha and work without any pay. The Sangh looks after their basic food and shelter. “I live in the shakha headquarters and travel in surrounding villages to recruit new members,” says Devraj Desai (22), a rifle training instructor, from Dhansura village in Sabarkantha district. “I was in the army for one year. One of my uncles died while serving in the army and another lost his leg. After that, my family asked me to leave the army. I always wanted to work for the nation, so I joined the Bajrang Dal in 1999.”

For many, Hindutva is a family tradition. “I was in the RSS since I was 10 years old. My entire family is part of it,” says Ashok Vaghela (30), the lathi instructor, who is a small trader from Ahmedabad. “The Bajrang Dal teaches you more about security work compared to the RSS. But both have the same goals – to create a Hindu Rashtra. The Islamic and Catholic movements are a threat to our country. Islam is spreading terrorism. Christians are converting poor Hindus.”

Both instructors and participants recited the same lines. Their education was complete. So was the military-like discipline. “We can’t talk to you until our senior gives us permission,” the instructors told me. I had to conduct all interviews with the camp organiser looking over my shoulder and prompting participants when necessary. As soon as the whistle blew, a young boy whom I was interviewing jumped up and said he had to leave.

The boys had to sit through another ‘knowledge’ session. But the organisers didn’t allow me to attend. I tried to listen, to catch snatches of enlightenment. The speaker was telling the boys how to prepare for an emergency – a riot, earthquake. Who should be contacted, what should be done. One of the organisers saw me listening. “He is telling them what they should do in case there is any civil disturbance,” he said.

After that, the organisers told me they had changed their plans. Instead of the evening physical training session, there was going to be a march through the town to make people aware of their public demonstration and trishul distribution ceremony the next day. Soon, I was asked to leave. “We have let you stay here for long enough. It is time that you left,” said the organiser, who had initially interrogated me. After being treated to such a generous helping of VHP-style Bharatiya culture, I didn’t persist. I left immediately. With a lingering suspicion about what was going to follow.

As we drove out, the guards had put down their rifles and were napping near the gate. But for the young men inside the camp, it was an awakening…