Dazed and confused. That’s how most Gujaratis felt after two terrorists stormed the Akshardham temple in Gandhinagar on September 24th, 2002, murdering 37 and injuring 81. For a state yet to fully recover from the recent communal violence, the deaths of innocent devotees (including young children) came as a grim reminder that violence could still spark off anytime, anywhere. Another tragedy in the cycle of violence that has struck Gujarat. But for the grim reapers of the violence, it was another tragedy to twist for political mileage.

A fleet of VIP aircraft lost no time in heading straight for Gujarat. Prime Minister Atal Behari Vajpayee immediately cut short his visit to Maldives and flew straight to Gujarat. He was in Gandhinagar within 24 hours of the militant attack. But earlier this year, when communal violence broke out in late February, he arrived on the scene 35 days later. Only after more than 1,000 people were killed and 1.5 lakh were left homeless. Even deputy Prime Minister L.K. Advani reached Gujarat only three days after the torching of the Sabarmati Express in Godhra, which killed 59 people and sparked the communal violence. By then, Sangh Parivar mobs had already ravaged the state with attacks on Muslims. But, within three hours of the Akshardham siege, Advani made his way to the temple complex. Both leaders raced to the temple, clambering to claim the Akshardham ‘victory’.

Deputy Prime Minister L.K. Advani hailed it as ‘a victory over terrorism for India’ soon after National Security Guard commandos ended the siege by killing two militants. He asked the tired commandos to stand up and chant ‘Bharat Mata ki Jai’. Many within the BJP are already doing the victory dance, even before state elections have been announced. But it’s a dance over dead bodies. It’s a victory that left 37 dead and 81 injured. 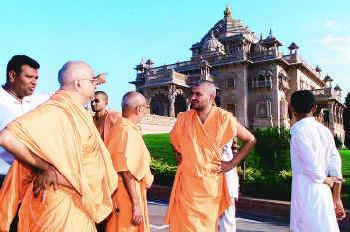 Sadhus belonging to the Swaminarayan sect outside the Akshardham temple. Photo: Paras Shah
By immediately blaming ‘the enemy’ Pakistan for the siege of the temple, Advani tried to deflect attention from the fact that it was a revenge attack. Innocent people died in a suicide strike provoked by his party. The militants apparently wanted to avenge the recent state-supported communal terror in Gujarat. The Sangh Parivar had orchestrated these attacks on Muslims following the burning of the Sabarmati Express in Godhra. While revenge is no justification for perpetuating violence, the attack symbolises the deep impact that the Gujarat carnage had on persecuted Muslim youth. The police had anticipated terrorist attacks to avenge the communal carnage. It had alerted the government as early as in March. At Akshardham, a note found in the pocket of the dead militants from the Tehriq-E -Kasas (Movement for Revenge) stated, “This is a gift to Modi and Advani.” Yet, Advani immediately accused Pakistan, in an effort to deflect attention from the BJP’s hand in inciting the attack. Even before investigations began, Chief minister Narendra Modi insisted that the terrorists were from outside the state.

The police have reportedly unveiled two separate plots to assassinate Modi. Soon after the Akshardham attack, the police arrested Samirkhan Pathan in Rajkot for allegedly planning to kill the CM. He was reportedly trained by the Jaish-e-Mohammed terrorist network. Later, three other accomplices, including the son of an ex-Congress member, were detained.

Whether the BJP will gain electorally due to Akshardham depends on the extent to which voters fall for its anti-Pakistan propaganda. The BJP is doing its best to milk the temple attack for all it is worth. The appeal is purely emotional – stoking Hindu insecurity and playing on fears of more terrorist attacks. Modi is being projected as the Hindutva hero. A few months after the communal fervour had died down, Modi was besieged with dissent within the party. The powerful Patels, loyal to former CM Keshubhai Patel, refused to co-operate with Modi during his electoral campaign. But for now, the dissenters are lying low.

The jingoism could be momentary. Some are already seeing beyond. “The party may get more votes after Akshardham, but there may not be an electoral sweep, as anticipated by most members,” says a BJP insider. “Some voters are upset that Narendra Modi has brought violence to a once-peaceful state. He will now try to project himself as the man fighting terrorism, but he was the one who invited terrorists to Gujarat.” The Congress(I) is also using Akshardham to highlight the state government’s security lapses and its inability to protect the lives of Gujarat’s citizens. But it is being drowned out by the BJP’s anti-Pakistan discourse. Sensing that the BJP may gain an edge in cities by playing on fear and insecurity, the Congress is focusing on the countryside and the government’s neglect of rural development.

The BJP is still banking on its image as the self-proclaimed protectors of Hinduism. But that image has may have suffered a beating. It failed to safeguard one of the largest temple complexes in the state belonging to the most powerful sect, the Swaminarayan sect. Many followers of the sect are from the politically powerful Patel community, who are traditional BJP supporters. They are likely to remain loyal to the party, but still resent Modi. 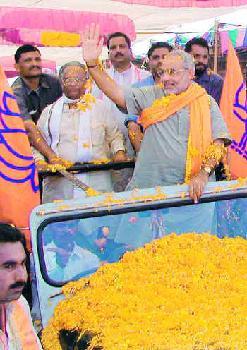 Chief Minister Narendra Modi resumes his `Gujarat Gaurav Yatra’ on October 5 from a temple in Ambaji Photo: Paras Shah
When Modi went to meet the head of the Swaminarayan sect Pramukh Swami Shri Narayan Swaroop Dasji, hoping that he could convince him to make a statement condemning Pakistan for the Akshardham attack, the swami refused. Instead, he told Modi to ‘show restraint’. Chiding the chief minister, the swami reportedly said, “Whatever has happened at Akshardham has happened. Whoever has done it, we don’t want to blame anyone. There is no need to drag any names into this now. And I think you should also stop referring to the ISI and ‘Miya Musharraf’ and make efforts to maintain peace.” (Sunday Express, 29th September, 2002)

Even prior to the Akshardham attack, several Hindu and Jain priests were angry with the BJP government. The Jain muni Acharya Mahapragya had asked Narendra Modi to call off the BJP’s Gujarat Gaurav Yatra to prevent violence in the state. A delegation of sants had called on the CM with a list of their problems, which they felt were being ignored by the BJP government. Just a few weeks before the attack, Modi had come under fire both within and outside the party for making insulting speeches against Muslims during his electoral campaign — the Gujarat Gaurav Yatra. He said, “What should we do? Run relief camps for them? Do we want to open baby-producing centres? But for certain people that means ‘hum paanch, hamare pachis’ (We five and our 25)…We must teach a lesson to those who multiply like this.”

Despite the chaos after Akshardham, Modi resumed his Gaurav Yatra on October 5th, which is perceived as stirring trouble in the state. This time it started at Ambaji temple, situated close to the Gujarat-Rajasthan border. Modi’s bus-turned-chariot, fitted with a hydraulic elevator, briefly passed through Rajasthan as well. Incidentally, the managing director of the Gujarat State Road Transport Corporation, J.S. Rana, who refused to provide 600 buses at reduced rates to the BJP so that they could ferry people to the yatra, was shunted out of his post as a punishment. He has now been sidelined to the post of principal secretary, cow breeding and pilgrimage. At Ambaji, the anti-Pakistan rhetoric continued. Modi blamed Pakistan president Pervez Musharraf for the conspiracy to assassinate him. But when it came to Akshardham, the rhetoric changed conveniently. “Vote-hungry politicians are saying Akshardham was attacked because I made critical remarks about Musharraf,” Modi said. But, he claimed that terrorists attacked to stop Jammu and Kashmir elections and to demand the release of ten jailed terrorists. Once again, a convenient and unsubstantiated deflection from the truth.

Following the BJP’s cue, the VHP has also used the anti-Pakistan line. It demanded a war to ‘break Pakistan into 40 pieces’. The VHP’s call for a national bandh struck fear in Gujarat. It was during the last VHP bandh after the Sabarmati Express burning that communal mayhem ravaged the state. This time round, Muslims, who had just returned to their homes, fled back to relief camps. “Last time, they attacked us on the day of the VHP bandh. As soon as we heard about the Akshardham attack, we feared another onslaught. The police advised us to leave our homes. They couldn’t offer us protection. So, we left late at night in a truck organised by the relief committee. We spent the night in a school and then made our way here,” said Ershad from Naroda Patiya, where the most horrific massacre occurred, killing more than 83.

Fortunately, no one was killed during this bandh. But two people were stabbed in Surat and riots broke out in Ahmedabad, Bhuj, Bharuch, Palanpur and Valsad. Even two weeks after the bandh, scuffles continued in Vadodara and Bhavnagar. The Sangh Parivar chose to exercise restraint. The fear of President’s rule being imposed if violence erupted again probably prompted the Sangh to control its cadre. Perhaps the BJP didn’t feel the need to stir trouble this time since it senses that it is already riding a strong Hindutva wave. The VHP offers a somewhat different explanation. Its international president Praveen Togadia said that the bandh was peaceful this time because the state responded effectively to curb the terrorists. Chief minister Narendra Modi’s explanation for a relatively peaceful bandh was, “This time, pseudo-secularists behaved and did not make statements against the majority community.” The Congress(I) tried to beat the BJP at its own game, using the Akshardham incident to appeal to Hindu voters. It pre-empted the VHP by calling for a bandh on the day after the siege. Its bandh, however, didn’t instil the same kind of fear.

Both Vajpayee and Congress(I) chief Sonia Gandhi visited Akshardham at the same time the next day. The PM expressed grief that terrorists entered a religious place. But there was no similar expression of sorrow when his own cadre destroyed around 209 masjids and dargahs during the communal carnage. Several historical monuments were obliterated. The 18th century tomb of Sufi saint Vali Gujrati was destroyed in Ahmedabad. Overnight, there was no sign of its existence. The Ahmedabad municipal corporation built a tarred road over the ruins, leaving no trace of the historical monument. In Vadodara too, the tomb of Hindustani music maestro Faiyaz Khan was destroyed and wreathed with burning tyres. The stone mosque of Malik Asin in Ahmedabad, a protected monument built in the 15th century, was razed with bulldozers. The mosque of Muhafiz Khan in Ahmedabad was also destroyed. There was never any talk of punishing the ‘terrorist’ mobs behind these attacks.

Post- Akshardham the Gujarat BJP has latched on to the anti-Pak bandwagon. It is pointing the finger outside, to deflect attention from what lies within. Just before a crucial election, the party had no achievements to speak of. It will now use the anti-terrorism stand to shift focus from its government’s failures as well as its hand in the cycle of violence. With every new outbreak of violence, the politicians keep counting the votes. It’s only ordinary people who mourn the mounting deaths.